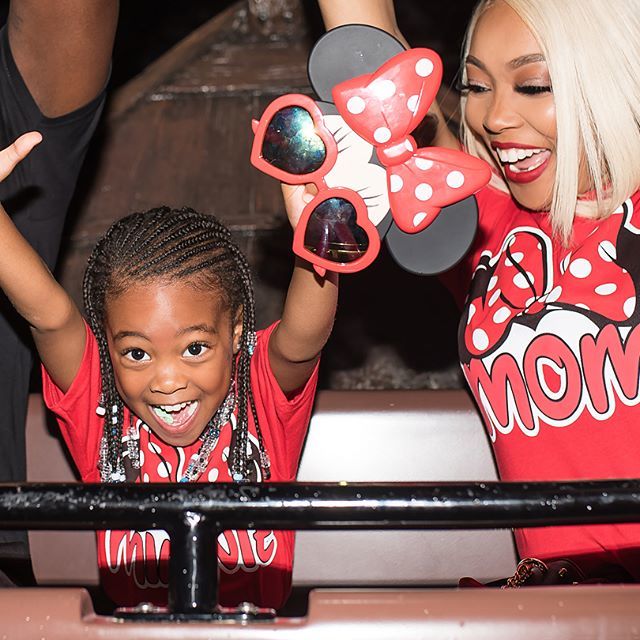 They matched one another and explored the wonderful world of Disney together. Monica and her daughter, Laiyah Brown, spent the weekend celebrating one another in what the ‘So Gone’ singer coined as “Mommy-Daughter Day.”

“We started at Animal Kingdom,” Monica said of the rides that she and Laiyah took on while at one of Disney’s many theme parks. “One of Laiyahs favorite rides was Flight of Passage & Navi River both created based on Avatar,” the celebrity mom added. “Laiyah said for sure Romelo would love these.” Laiyah is always thinking of her brothers. How cute!

The youngster and her mom also spent time with the characters of the hit film, Frozen. “Never enough Frozen for this one,” Monica mused. “So, of course, we headed over to Epcot to check out the Frozen Ride and say hello to Elsa and Ana.” Monica and Laiyah received a VIP tour of the set, which was probably right up the preschooler’s alley.

Never enough Frozen for this one LOL so of course we headed over to Epcot to check out the Frozen Ride and say hello to Elsa and Ana ?❄️⛄️ Thanks to Nora our VIP guide …

Monica ended the day by reflecting on her and Laiyah’s time spent together. “Mommy-Daughter Day has been EPIC,” the star mom wrote on Instagram. “[Laiyah] has repeatedly told me she loves me and let’s ride ONLY rides that go fast,” the star mom joked.

We started at Animal Kingdom …. One of Laiyahs favorite rides was Flight of Passage & Navi River both created based on Avatar … Laiyah said for sure Romelō would love these ❤️

What you looking at sis ??‍♀️ We just Out here living our best life LOL… I always tell me children take your Happy with you & always be YOU!! So yeah we’re dancing in the middle of a packed parked singing the best friend song !! LOL (by the way the little girl watching us is adorable!! all in fun❤️)