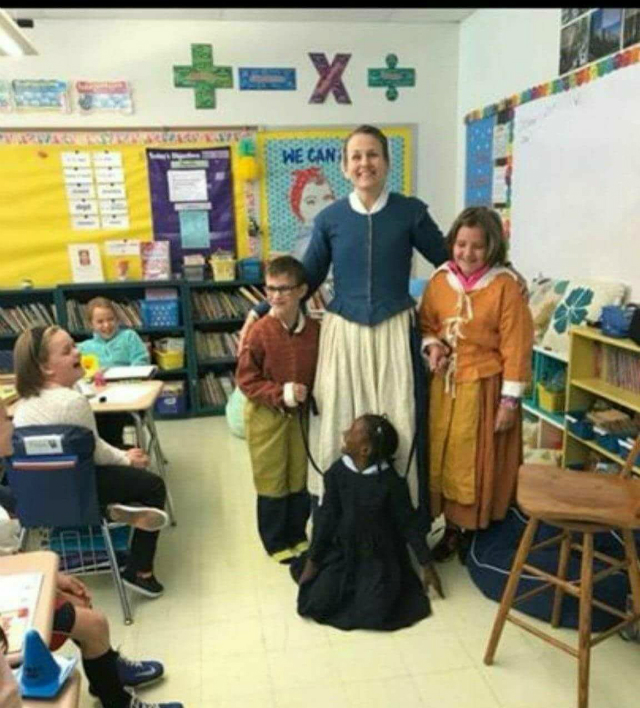 Administrators at Mitchell Elementary School in Bridgewater are apologetic after a photo of theirs went viral for all of the wrong reasons.

The picture shows a teacher getting interactive with a lesson about the Pilgrims with her students. The problem with the candid comes about with the only African-American child in the pic being captured while kneeling beneath her teacher and two other students who are all white. Perhaps the outrage wouldn’t be so great if what are identified as “lead straps” were not attached to the kneeling child in the shot. The other students are holding the ends of the straps, which makes the appearance even worse.

Many who viewed the photo online called it out as nothing short of racist. A Buzzfeed writer, however, spoke with the staff member at the center of the controversy, Vicki Oman, and determined that “there was no racial element” to the story.

An unnamed insider agrees saying, “If you look at that picture out of context, what are you going to think? It’s clearly what it looks like, it’s disgusting. It seems like enslavement of a person. Even the color of the child has nothing to do with it.”

Disgusting? Yes. As far as the “color of the child” having nothing to do with the scenario? Undecided.

In any case, the school has issued an apology for the scenario and, of course, removed the photo from its social media site.

“It was never the intent of the lesson to demean or degrade any one person or group,” Superintendent Derek Swenson says in a statement. “The Bridgewater-Raynham Regional School District sincerely apologizes to the students, staff, and community at large for this unfortunate incident.”

BCK Asks: What do you think about this?

Does motherhood make you more of a woman? This was a question posed by Tamron...

Netflix is in the news and this time it is not to announce new show...