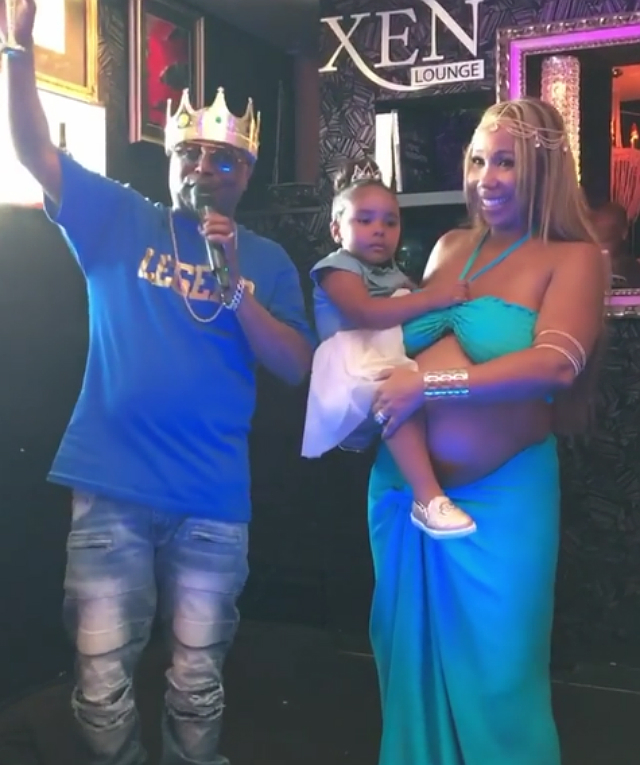 Alex Thomas and his wife, Brasie Patterson, are in the final stretch of their expectancy. The couple celebrated their son Legend’s impending birth this past weekend.

Alex was the doting father at the baby shower as he made the proud announcement of his son’s tentative arrival date being, which is Thanksgiving Day. “I want to throw a big toast to Legend,” he said in a video clip. “Big toast to Legend Alexander Thomas, who will be arriving on Thanksgiving. This will be the greatest blessing ever,” Alex concluded. Attendees cheered along with Brasie and Halo who let their excitement about the newest family addition show.

Little Halo’s face lit up after her father announced her little brother’s expected arrival date. “She gonna be a great #BigSister,” Alex captioned underneath a photo series that showed Hallo taking part in the baby shower’s festivities. “I can’t believe how much Halo has grown up,” one fan exclaimed. “She’s a little princess. Congrats!”

Alex and Brasie shared news of their expectancy earlier this year. The couple later told fans that they were preparing to welcome a little boy into their happy home this fall. “It’s a boy,” Alex shared online in May. “We can’t wait for Legend Alexander Thomas to get here,” he added. Neither can we, Alex. Neither can we.

Little Legend will make the Thomas’ parents for the second time. Alex and Brasie celebrate their third wedding anniversary this year.

DADDY AND ME: USHER, CHAD JOHNSON, FUTURE, AND MORE

DADDY AND ME: USHER, CHAD JOHNSON, FUTURE, AND MORE