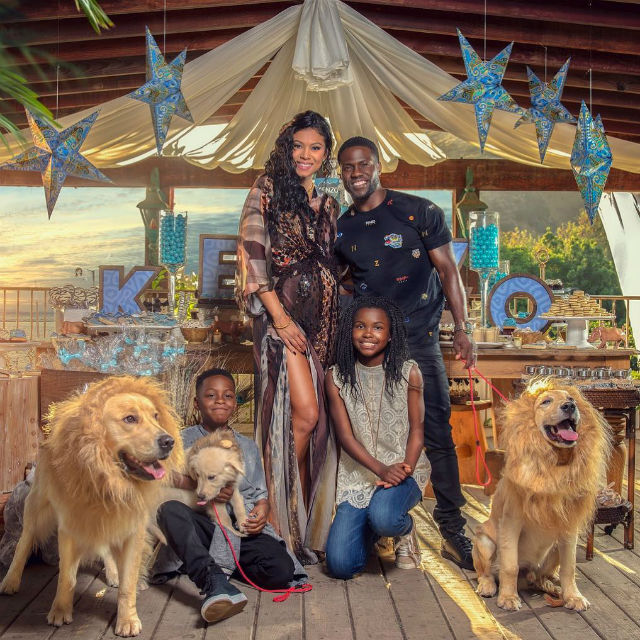 Eniko and Kevin Hart have a name for their son! The couple shared the news with family and friends who attended their baby shower this past weekend.

“Kenzo” is the name that Kevin and Eniko have chosen for their little one. The couple was so excited about their decision that they decided to share it, along with a snippet of this past weekend’s baby shower, with their Snapchat fans. Eniko’s fashion sense matched the party’s theme, which was based on The Lion King. Her dress had animal patterned designs throughout.

“We couldn’t afford a lion,” Kevin told fans on Snapchat. “So you got the dog and just put the thing around the dog. It’s still balling. Just on a budget.” Hilarious!

The expectant father wasn’t too reserved when planning his wife’s baby shower. It was just the other week that TMZ revealed the comedian’s plans to spend upwards of $117,000 on the bash. “Kevin and Eniko are dropping serious cash for a ‘Lion King’ themed shower on Oct. 1 at the Calamigos Beach Club in Malibu,” the media source reported.

“The venue will be decked out in leopard print and safari animals pics — and a Hart family photo ‘with a silhouette of pregnant Eniko leading the way.'” Kevin and Eniko also allegedly planned to have an “Experience Bar” that let guests try exotic foods that they wouldn’t ordinarily eat. The bar was also reportedly the spot for adults who wanted to get in touch with their imaginary sides by dressing as tribal characters.

Kevin and Eniko Hart are expecting their son to arrive in coming weeks. Little Kenzo will join his big brother, Hendrix, and older sister, Heaven, at home.

Just a few of Kenzo’s beautiful aunties.. oh he’s going to be spoiled. ?

KEL MITCHELL HAD A 'HAPPY SUNDAY' WITH HIS DAUGHTER