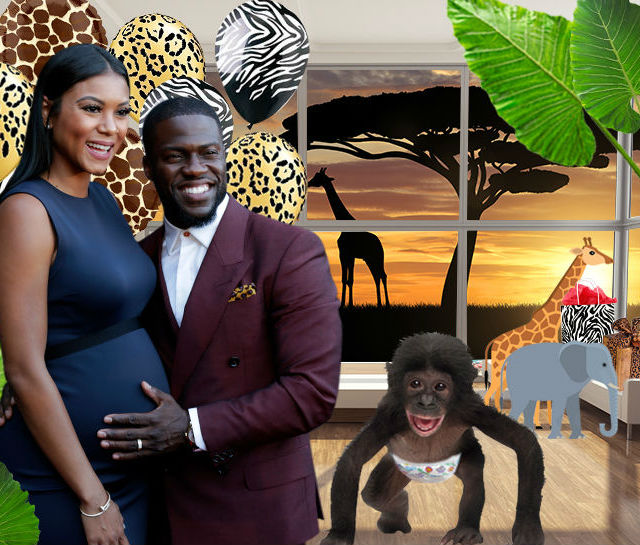 What do you do when facing the backlash from an extortion scandal that paints you in an undesirable light? Plan an extravagant baby shower! Eniko and Kevin Hart are not letting recent events inhibit their happiness. The couple is reportedly preparing to throw a baby shower that costs upwards of $117,000.

“Kevin and Eniko are dropping serious cash for a ‘Lion King’ themed shower on Oct. 1 at the Calamigos Beach Club in Malibu. The venue will be decked out in leopard print and safari animals pics — and a Hart family photo ‘with a silhouette of pregnant Eniko leading the way.’

They’re also having an ‘Experience Bar’ where guests can sample exotic foods and dress up like tribal warriors — and a game show similar to ‘The Price Is Right’ where guests can win prizes. All set to ‘Lion King’ music, of course.”

A fabulous party of this sort isn’t cheap. Kevin and Eniko are reportedly putting out $117,855 for the whole bash. Such price tag includes the couple paying $1,500 to have a chimp dressed in a diaper show up. Now, how’s that for attention to detail?

It’s great to see Kevin and Eniko Hart moving forward after this past weekend’s events that include Kevin taking to social media to share his heart. The comedian admitted to Instagram followers that he allowed himself to be caught in a compromising position a few weeks back and wasn’t completely faithful to his wife. The admission came after TMZ and other media outlets shared footage of Kevin and a then-unidentified woman becoming dangerously acquainted. The woman is now identified as Montia Sabbag and stands at the center of what Kevin deems an extortion attempt.

“I am not an extortionist,” Montia said during a press conference earlier this week. “I had nothing to do with these recordings.”