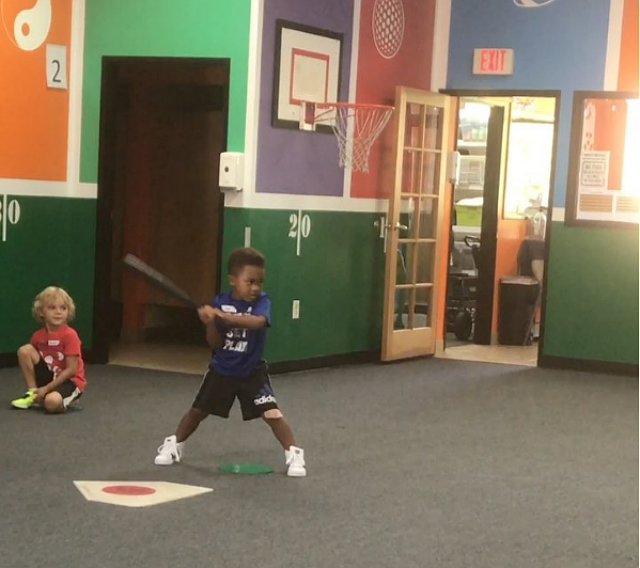 The apple doesn’t fall too far from the tree! At just 3-years-old, Carl Leo Crawford is taking after his famous father, Carl Crawford Sr.

Big Carl plays for the MLB, and it appears that his son may do the same in coming years. Little Carl’s mother, Evelyn Lozada, recently shared video clips of her and Carl’s son practicing the game with a plastic bat and ball. Carl Leo’s skills weren’t too shabby for 3-years-old. In fact, the little one was quite precise and powerful with his hitting.

“Loves the game,” Evelyn told fans. Another clip was one of Carl Leo being a bit playful while practicing. “He’s so silly,” Lozada exclaimed. “That pose tho,” one fan mused. Another of Evelyn’s followers wrote, “Little man is so funny, yet so serious though.” Totally!

Evelyn Lozada returned to the Basketball Wives franchise after taking a breather from the reality series. The star was able to mend a few fences, which included hashing out her differences with Jennifer Williams.

“I’ve known Jen since I was about 24, so when there were rumors that she was possibly coming back, I [reminded producers] that I have real history with this person,” Lozada explained. “One of the reasons why I wanted to come back to Basketball Wives was to be able to film stories like the one with [Williams],” she added.

“I’m at a point in my life where — especially after having my son and taking a break [from the show after season five] — sometimes you need to take pause.” Taking a break from Basketball Wives doesn’t mean that Evelyn doesn’t support the notion of Reality TV.

“Reality TV has worked for me and I know what comes with it,” the celebrity mom revealed. “I would love to have my own show again obviously, I’ve had my own show. I was so thankful for that opportunity so yeah, if someone else offered me my own show I would be open to it.”

Carl Leo is Evelyn Lozada and Carl Crawford Sr.’s only child together. The celebrity mom also has an adult daughter from previous relations.

ALEXIS OHANIAN THINKS HE AND SERENA WILLIAMS ARE HAVING A GIRL: HERE'S WHY!

ROUND 2! TICHINA ARNOLD AND DAUGHTER GIVE ANOTHER DOSE OF 'SCHOOL MORNING PLAYLIST'

ROUND 2! TICHINA ARNOLD AND DAUGHTER GIVE ANOTHER DOSE OF 'SCHOOL MORNING PLAYLIST'