MIKE EPPS ENJOYS HAWAII WITH HIS DAUGHTERS AND GRANDDAUGHTER 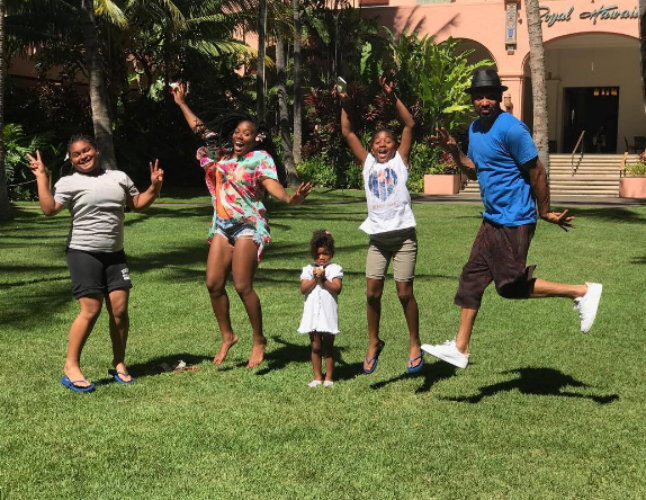 Summer vacation with the family in Hawaii? Yes, please! Mike Epps recently shared pictures from his and his daughters’ getaway on Instagram.

One candid was of Mike and his kids in motion. The celebrity father was leaping through the air along with his daughters who also gave lively poses. Epps’ granddaughter, Skylar, was also in the shot but decided to stand and pose instead of jumping up for the candid. The little one also took a photo with just her and grandpa that was nothing short of precious. “Grand baby love,” Mike wrote. “Skylar my face still stings,” he added.

Epps’ “stinging” face was due to Skylar giving him a bit of tough love earlier. The comedian was coming in for what he believed would be a beautiful kiss on camera when Skylar changed her plans and slapped his cheeks. “I’m DONE playin with these kids,” Mike mused in an Instagram post showing the hilarious moment. “You try to be nice and look at how they act.”

I'm DONE playin with these kids! You try to be nice and look at how they act. #getyallshittogether #timetogohome #itactuallyhurt #lovemygrandbaby #hawaii

Mike Epps has been in the news for reasons not as pleasant as family time with the kids as of late. TMZ recently reported the comedian’s estranged wife, Mechelle Epps, asking for a whopping $109,000 per month in spousal support.

“In the docs, Mechelle says she spends several thousand bucks a month on shoes and clothes for their 10 and 12-year-old girls. Plus, the girls have to get their hair braided at an ‘expensive salon’ … not to mention food, vacations and $72k per year for private schooling,” TMZ revealed. Mechelle also allegedly told the courts that she refrained from working during her and Mike’s marriage at the request of her husband and now lacks the skills needed to obtain a high-paying job.