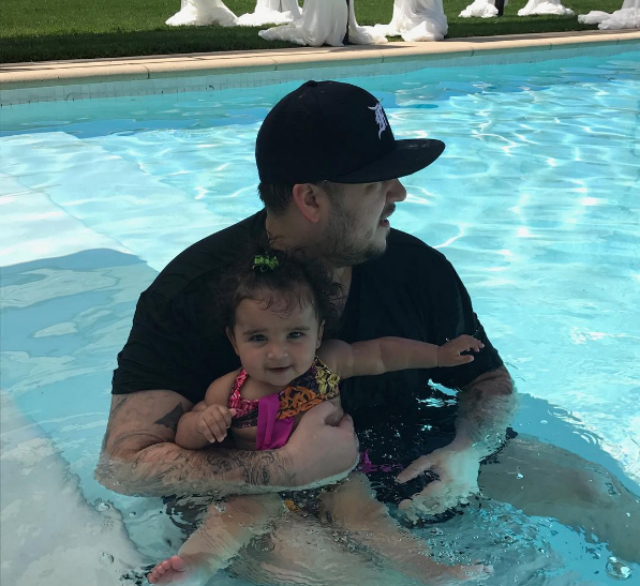 What did Dream Kardashian do for the extended holiday weekend? Why, hang out with dad, of course! Rob Kardashian shared a series of adorable pictures of him and his daughter spending time together poolside on Tuesday.

“Happy 4th,” he captioned underneath one post. “Everyone be safe.” Dream was looking square into the camera’s lens in the picture while floating along in the family pool. Rob was the protective dad in the shot who held onto his daughter as she enjoyed the water. “Your baby is a little cutie,” one fan wrote. “A bond between a father and his daughter is magic.”

Dream and Rob were a part of Khloe Kardashian’s epic 4th of July super party that included a portable water slide and loads of desserts. The reality star shared several video shots of her party with Instagram fans on Tuesday, which included a clip of Khloe and her mom, Kris Jenner, wishing their fans well on the holiday. “Happy Fourth of July,” the two exclaimed in unison.

It was just last year that Khloe opened up about her life as a reality star. “The thing I dislike the most [about being a Kardashian] is the judgment on us,” she told Harper’s Bazaar. “If I want to go out with a group of friends, it’s never as harmless as that. There has to be some story the next day that I’m dating somebody.”

Rob can also identify with such perception as he received loads of good and bad press when he and Blac Chyna ended their engagement last year. Despite public opinion, the celebrity father has managed to weather the storm and come out on top with him and Chyna working together as co-parents.

Dream Kardashian is Rob’s only child. She celebrates her first birthday in November.