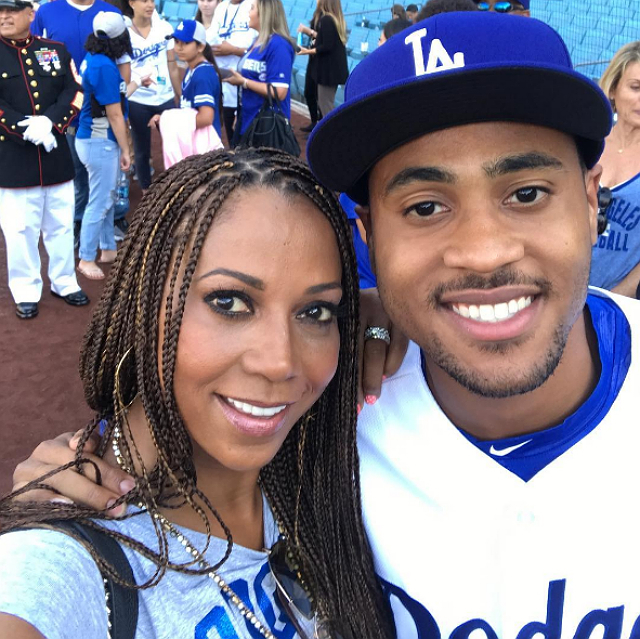 Holly Robinson Peete had the pleasure of singing the national anthem at this weekend’s Dodgers game, and her family beamed with pride. The actress’ son, Rodney Peete Jr., stood behind her with a right hand over his heart as his mom belted out the lyrics to the ‘Star Spangled Banner.’

“Ummmm Noooobody told me he was gonna be standing behind me,” Holly told Instagram fans. “I broke down after,” she admitted.

Ummmm Noooobody told me he was gonna be standing behind me ???I broke down after. Thank you @dodgers #thismothersheartisfull #nationalanthem ?⚾️??

Holly’s rendition was simply beautiful with the actress starting off in a comfortable key and modulating at the right times to give the anthem just enough flavor. Thousands of fans praised the celebrity mom online after viewing footage of her performance. “You go girl,” one Instagram subscriber exclaimed. “Did not know you could sing.” Another follower who remembered Holly’s musical days wrote, “So wonderful hearing you sing again. Hope to hear more.”

Holly has been doing a lot to spread awareness about autism these past few years. The celebrity mom and her husband, Rodney Peete, Sr., often praise the Dodgers for hiring their oldest son who lives with the disorder. “He brings a different spirit to the clubhouse, he’s always happy and excited to get there every day,” team player Justin Turner says. “He picks up the whole team.”

R.J. is certainly destroying barriers and inspiring others along the way. The teen is even en route to getting his driver’s license, which has Holly both excited and petrified. What’s next for this young adult who’s redefining societal perceptions? We’ll just have to wait and see!

CALI DREAM WANTS YOU TO SEE HER PINK PALACE

CALI DREAM WANTS YOU TO SEE HER PINK PALACE