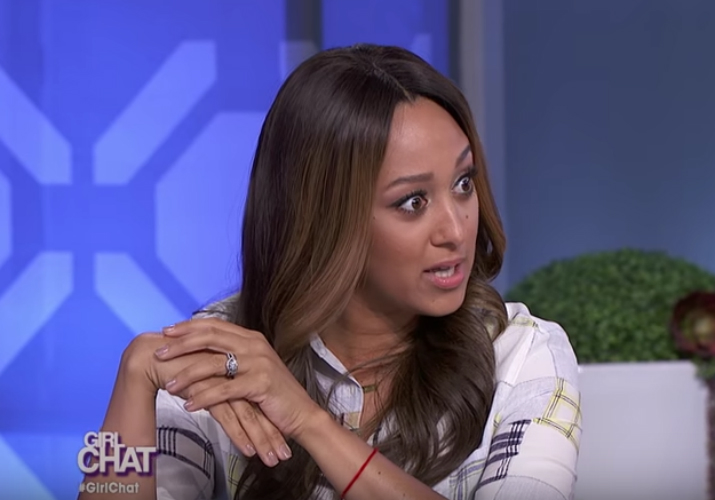 Aden Housley is exploring the wonders of language and that includes repeating a few vulgar phrases. Tamera Mowry-Housley recently revealed how she reacted when her son dropped the F-bomb.

“Aden, this past weekend, I told him, ‘Okay, it’s time to get out of bed.” And, you want to know what he said to me,” Tamera asked. Fans and the television personality’s co-hosts responded with extreme interest. “It rhymes with bucket,” Tamera finally revealed. “I said, ‘What did you say? Did you say bucket, Aden? Did you say bucket?’ He said — and then I watched his little lips to make sure, you know, it wasn’t an ‘F.’ So I said, ‘Aden. Did you say bucket? He said, ‘No. I said…,'” you get the gist.

Tamera’s response was nothing short of hysterical. “I started freaking out and I was like, ‘Okay, okay. Where did you learn this?’ I called my husband. I was like, ‘Adam! You’ll never believe what your son said. And I pointed the phone to Aden and I was like, ‘Aden! What did you say?’ He was like, ‘Bucket.'” Aden’s attempt to save face obviously didn’t work.

It was just a few weeks ago that Tamera shared tips on how to get the kids to sleep through the night. “If you want a baby that will sleep through the night, the first step is getting them to fall asleep, and keep that routine to create consistency in their lives,” she told her blog readers. “Kids of all ages love sound soothers,” Tamera added. “I know because both Aden and Ariah do.”

Will Tamera’s next blog post be about Aden’s first curse word? Maybe so, maybe no. Tamera Mowry and husband Adam Housley have two kids.

SURPRISE! BRANDON CASEY OF JAGGED EDGE IS A DAD AGAIN

SURPRISE! BRANDON CASEY OF JAGGED EDGE IS A DAD AGAIN