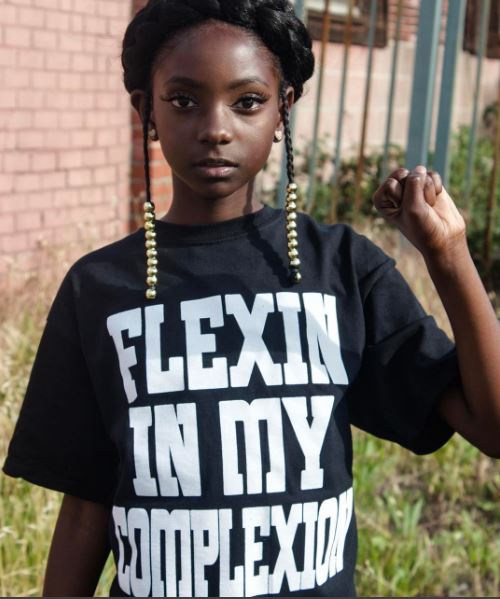 Colorism has long plagued the African-American community. Lighter skin has traditionally been glamorized while at the same time darker skin, frowned upon. Thankfully, we are moving towards a time where all shades of black can be seen as beautiful and ten-year-old Kheris Rodgers, from South LA, is making sure that it stays that way.

During a class exercise, Rodgers was told to draw herself and the teacher handed her a black crayon to which the youngster replied, “I am not that dark…I’m brown.” Not only was Rodgers tormented by teachers, she also had to contend with her classmates bullying her as well. Although her mother removed her from the school, the problem persisted.

Thank you all so much for supporting my new brand! If you haven't already, head over to flexininmycomplexion.com. The link is in my bio ? shirts come in black, red, or white! #kherisrogers #kheris #flexininmycomplexion #melaninonfleek #supportblackowned

In an effort to cheer up her little sister, Taylor Rodgers dressed up Kheris for a fashion shoot and shared photos on Twitter, posting, “My sister is only 10, but already royalty, “using the hashtag #FlexinInHerComplexion. The tweet went viral with over 30,000 retweets and counting.

Inspired by compliments from strangers, Rodgers has taken a negative and turned it into a positive and profitable business, with the creation of a fashion line that inspires confidence in young girls that share the same experience.

YOUNG STARS TURN OUT FOR THE 2017 RDMA AWARDS