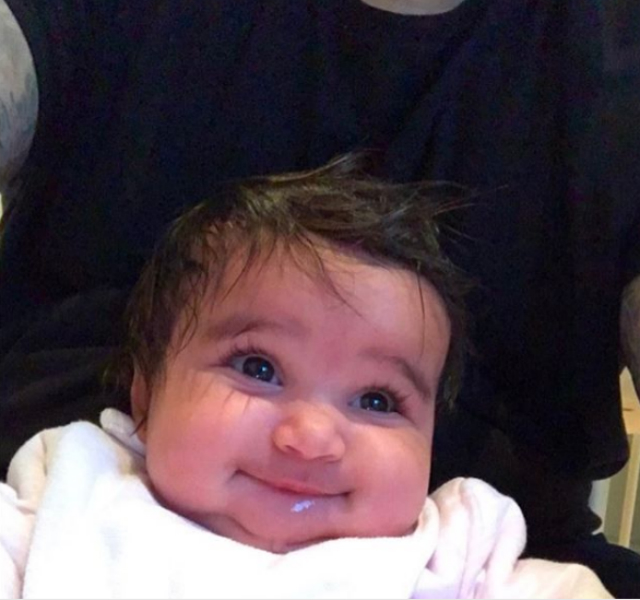 Here’s Dream! Rob Kardashian was on daddy duty a few days ago and shared pictures along with video footage of his little one hanging out with family.

One photo is beyond adorable as it shows Dream looking up while rocking drool. “Look how long her eyelashes are,” Rob gushed. ” I will never say no this woman,” he mused.

Reign Disick also got in on the love as she gave her cousin a kiss. “Dream’s big cousin Reign is the sweetest,” Rob told fans. “Children are the greatest.”

Dream's big cousin Reign is the sweetest ???????? children are the greatest ‼️

Rob is a first-time father who has received a lot of support from family. Fans got to see Reign’s father, Scott Disick, give Rob a pep talk during an episode of Rob & Chyna. Rob was expressing agony over Blac Chyna kicking him out of the house when Scott chimed in with words of wisdom.

“I know that it feels like you’re not wanted there, but you just got into a fight,” Disick told Kardashian. “You’re telling me my own life,” Scott added. “It happens! And by the way, she’s hormonal, she’s pregnant. If you weren’t to get kicked out it would be weird.”

An insider recently revealed Rob’s desire to be near his daughter 24/7. “He is making a big effort to get along with Chyna,” the family friend said. “She seems very happy with him. They are getting along great and enjoying parenting together.”

Dream Kardashian is Rob Kardashian and Blac Chyna’s only child. She was born on November 10, 2016.