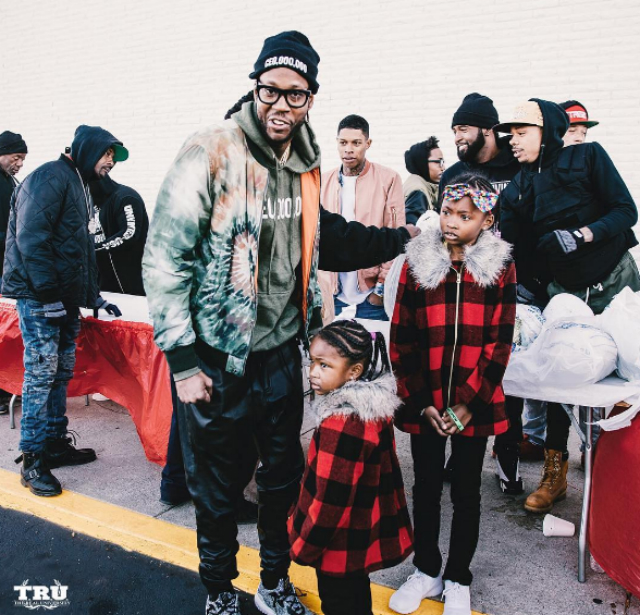 Tauheed Epps, a.k.a. 2 Chainz, is making a difference one turkey at a time. The rapper and his kids let their generosity shine through with a memorable Thanksgiving giveaway this past weekend.

2 Chainz had his daughters, Harmony and Heaven, by his side as he joined his team in giving to the less fortunate. “Teach them early,” he captioned underneath one picture. The rapper also shared a candid of his daughter having a one-on-one moment with one of the recipients.

“She don’t go to the good that often , not sure if that’s a good or bad thing,” 2 Chainz wrote. “I’m positive it’s a good thing though , I did it so they wouldn’t hVe to.”

She don't go to the good that often , not sure if that's a good or bad thing ?! I'm positive it's a good thing though , I did it so they wouldn't hVe to ??

Tauheed works hard to provide for his kids while being a positive role model for youth to emulate. “I think this is an important time right here,” he said during an interview with Paper magazine. “The youth are definitely looking for someone to look up to, someone that they can get education from besides a teacher.”

“A lot of kids listen to music, they watch sports and they pick their role models through different forums,” the rapper continued. “I just really like what we’re all doing, and especially as young black males: getting together and at least having a conversation on trying to change the planet.”

5 GROUND RULES FOR DATING AS A SINGLE PARENT

5 GROUND RULES FOR DATING AS A SINGLE PARENT