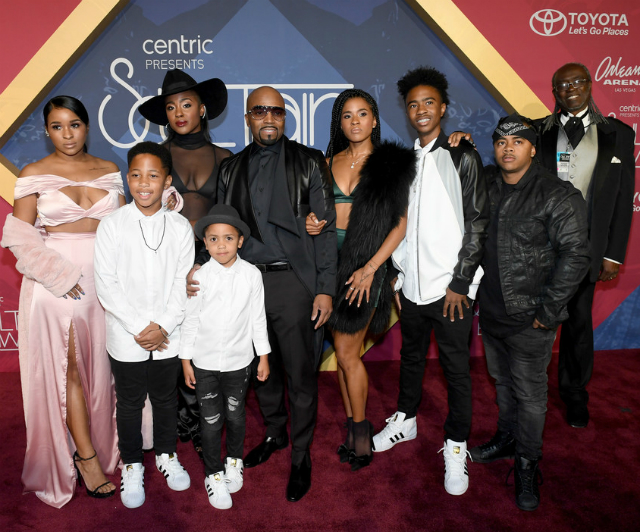 Teddy Riley received the Soul Train Legend Award this past weekend with family by his side. The veteran recording artist took to the red carpet with his sons and daughters surrounding him.

Teddy Riley has an entertainment career that spans more than three decades. “It’s an accomplishment,” the singer says of his most recent Soul Train award. “I’m just very thankful and honored to still be around because nobody lasts this long,” Teddy adds.

Much, if not all, of his longevity can be attributed to Riley’s creativity. The producer is recognized as the founder of the New Jack Swing genre that revolutionized the music industry.

“Sometimes you get overlooked in this business,” Teddy admits. However, “I find it hard to overlook what I’ve done, setting up in a genre like this, because there’s really only one person [credited] with doing this. Everyone started gravitating to this sound, people like Jimmy Jam and Terry Lewis and Babyface and L.A. [Reid], and all these artists started doing their version of New Jack Swing. Even Quincy [Jones] tried it with the Back on the Block record.”

Although many artists fade into the backdrop after so many years of A-list success, Teddy Riley is still in demand. “There’s a bit of a bidding war going on right now for the Teddy Riley and Friends tour,” the star says of future showings.

“Everyone is going nuts to see the groups I’ve worked with and those artists from the New Jack Swing era on the same bill,” Riley adds. “The best part is the opportunity to build with new fans who have never seen us live before. I’ve done the I Love the ’90s tour and that’s all about building new fans.”

Teddy Riley came onto the music scene back in the early 1980s. His group, Blackstreet, rose to worldwide fame in 1996 when they debuted their hit single ‘No Diggity.’ Take a trip down memory lane with the music video below (Warning: Viewer discretion is advised). Teddy Riley is the proud father of eight kids.