Home » NEWS » SOLANGE AND BEYONCE HAD QUITE THE EVENTFUL WEEKEND 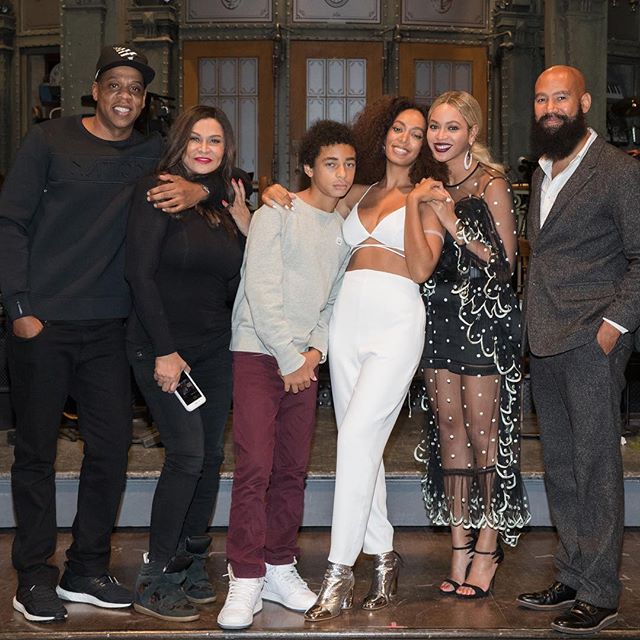 Solange Knowles is reaching higher heights and greater depths with her family by her side. The celebrity mom turned out the set of Saturday Night Live this past weekend.

Knowles rocked the stage with two selections from her celebrated A Seat at the Table album. “Cranes in the Sky” and “Don’t Touch My Hair” made the crowd go wild. Solange expressed gratitude in having the opportunity to perform songs from her latest project and even shared video footage of herself warming up backstage. “Jesus be a high note,” the singer captioned underneath footage of her hitting a glass-shattering note.

Beyonce and Jay-Z joined Solange and her son, Julez, in celebrating the Saturday Night Live debut this past weekend. Bey and Tina Lawson even picked up the woman of the hour after Solange’s performance. “I’m 30-years-old,” Solange said in the footage. “She’s still our baby,” Tina captioned.

She's still our baby ❤️We have Been picking her up like this since she was 10 yrs old . On the legendary SNL stage❤️

Beyonce and Jay-Z have been quite busy on the campaign trail with presidential candidate Hillary Clinton these past few days. The power couple joined thousands of others in celebrating the Democratic nominee for her tenacity in the face of opposition.

“Eight years ago, I was so inspired to know that my nephew, a young black child, could grow up knowing [that] his dreams could be realized by witnessing a black president in office. And now, we have the opportunity to create more change,” Bey said.

“I want my daughter to grow up seeing a woman lead our country and know that her possibilities are limitless,” the celebrity mom added. “We have to think about the future of our daughters, our sons, and vote for someone who cares for them as much as we do. And that is why I’m with her.”

Hillary Clinton is competing against Republican nominee Donald Trump for the 45th presidential slot. Check here for your polling place’s location and hours. Wath Beyonce and Jay-Z voice their support for Hillary Clinton below!

CHLOE X HALLE COME OUT IN SUPPORT OF DAYA BY ZENDAYA

CHLOE X HALLE COME OUT IN SUPPORT OF DAYA BY ZENDAYA