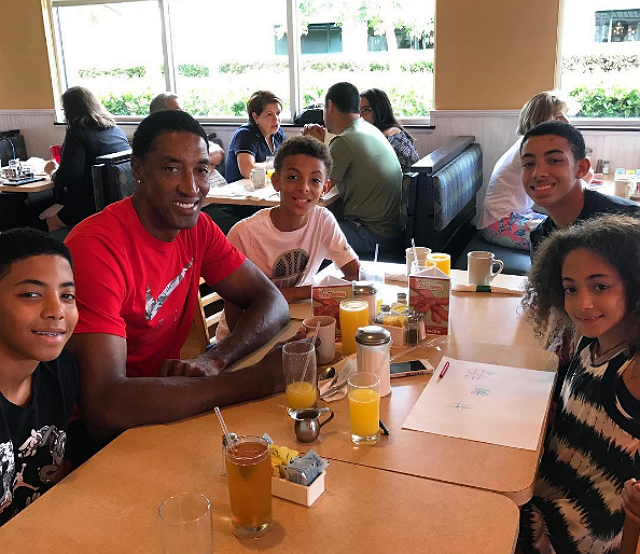 Scottie Pippen spent the weekend with his kids. The former NBA player shared a picture of him with his sons and daughter dining out for breakfast.

“Breakfast with the kids,” Scottie captioned. “Always have a ball with them.” It was just a few weeks ago that Larsa Pippen uploaded a picture of her and the kids in Europe. “Love this pic,” the celebrity mom wrote.

Larsa and Scottie Pippen have been going through a rather public divorce ever since the couple announced their separation. Scottie filed for marriage dissolution last month after nearly two decades of marriage to Larsa.

“This is a very difficult time for Mr. Pippen. He is hopeful that the divorce will be swift and amicable,” Scottie’s lawyer, Roberta G. Stanley, told the press. “We are respecting his request to protect his privacy and the privacy of his children during the dissolution of marriage proceedings.”

Larsa’s representative also commented on the couple’s impending divorce by telling media that the celebrity mom and her estranged husband “will always do what is best for their 4 beautiful children and jointly raise them with love and respect.”

While love, respect, and privacy are the goals, Scottie and Larsa have been in the spotlight these past few weeks for everything from custody battles to 911 calls. More recent reports surrounding the release of 911 calls made by Larsa to the authorities have taken some fans by surprise.

“Mr. Pippen is aware that some members of the press have obtained 911 recordings recently made by Ms. Pippen,” Roberta Stanley said last week in response to the chaos. “While these recordings speak for themselves, Ms. Pippen did not make any allegations of physical violence by Mr. Pippen,” she added.

Scottie and Larsa Pippen wed on July 20, 1997. The former couple’s daughter, Sophia, is growing by leaps and bounds in the fashion industry.