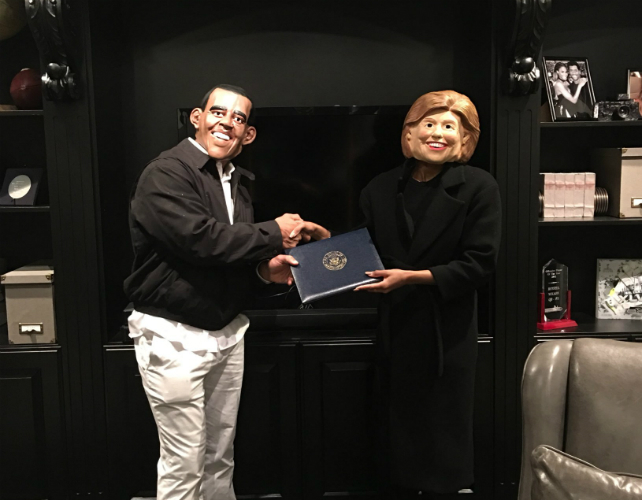 Because we couldn’t let this Halloween week pass without showing you Ciara and Russell Wilson’s version of the ‘Juju on that Beat’ dance. The celebrity couple nearly broke Twitter on Monday with footage of themselves dancing while rocking masks.

What made Ciara and Russell Wilson’s video so significant wasn’t their version of the ‘Juju on that Beat’ dance. Fans completely overlooked the freestyle choreography. The masks of Hillary Clinton, worn by Ciara, and President Obama, as rocked by Russell, could not be ignored, though.

Some fans thought the video was hilarious while others took issue with the footage. “Please Please Please Delete This,” one follower tweeted. “You guys are cracking me up,” another fan exclaimed.

Ciara and Russell Wilson’s Halloween costumes and video certainly add to the fire that is the upcoming presidential election. Some have sided with Democratic nominee Hillary Clinton, while others passionately follow Republican candidate Donald Trump. Several celebrities have used their sphere of influence to encourage citizens to cast their votes on November 8, 2016.

“We are not helpless,” Beyonce said during a recent concert. “The fire is still burning. Please go out and vote this November,” she added. “Too many people have died and sacrificed so much for us to have our voice, we have to use it.”

Ciara and Russell Wilson would certainly agree as the couple made it their business to present a politically charged presentation on Monday. Wilson even shared video footage of President Obama “passing the torch” to Hillary Clinton.

A recent poll conducted by ABC News and The Washington Post shows Trump with a slight edge over Clinton. Still, there is a three percent margin of error that the Republican candidate falls within that makes his lead statistically negligible.

Ciara and Russell Wilson are expecting their first child to arrive in coming months. The bundle of joy will make Ciara a mom for the second time as the singer already has a son named Future Zahir with rapper Nayvadius Cash.