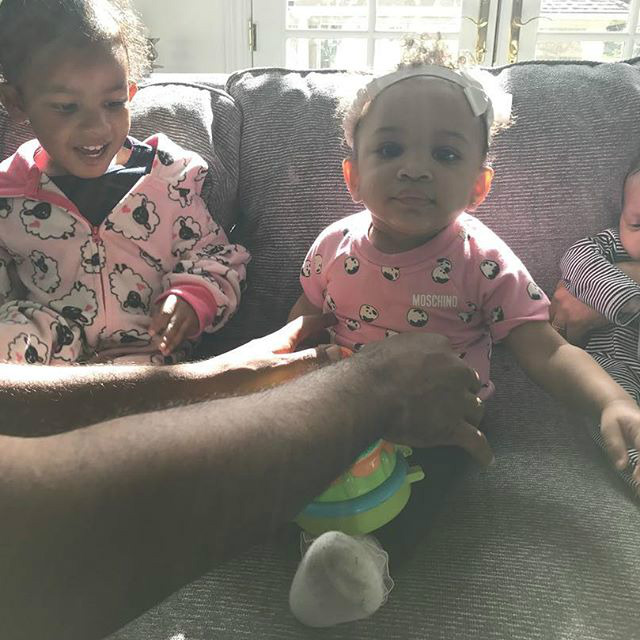 Rev. Run has much to celebrate this holiday season. All three of the celebrity father’s grandchildren were recently photographed together.

Mia sat in between Ava and Sutton. The little one was focused on the camera while her cousins turned their attention elsewhere. Ava, the oldest of the three, was all smiles while hanging out with the family. Baby Sutton, the family’s newest addition, focused on the task of sitting upright.

It was just a few weeks ago that Angela welcomed her son. “The best part of life has just begun #Motherhood #ImSoInLove,” the celebrity mom wrote shortly after giving birth to Sutton. Angela got back into the gym just thirteen days after labor and delivery, which impressed her fans to no end.

In many respects, Angela has taken some of her cues on parenthood from her big sister, Vanessa Simmons. The celebrity mom surprised everyone, including her parents, when she shared news of her and Mike Wayans expecting their daughter. Vanessa jokingly gave Ava a notice of eviction near the end of her third trimester and has gushed about motherhood ever since.

“She is a little miracle in my life and she’s come along and helped me restore faith in myself and confidence in myself,” Simmons said during an interview with Rolling Out. “My child has definitely allowed me to grow more. It’s just been an awesome experience for me,” Vanessa added.

Jojo Simmons and girlfriend Tanice Amira also added to the family tree. Little Mia was born in February and celebrated her dedication ceremony with family members and friends this past summer. She made Jojo and Tanice parents for the first time.

Rev. Run and wife Justine Simmons parent six kids together. The celebrity family has been featured on several reality shows including the famed ‘Run’s House,’ which aired from 2005 to 2009. Rev. Run and Justine presently give fans a taste of their culinary and interior design skills on ‘Rev. Run’s Renovation’ and ‘Rev. Run’s Sunday Suppers.’

GET READY BECAUSE IT'S 'ALMOST CHRISTMAS'!