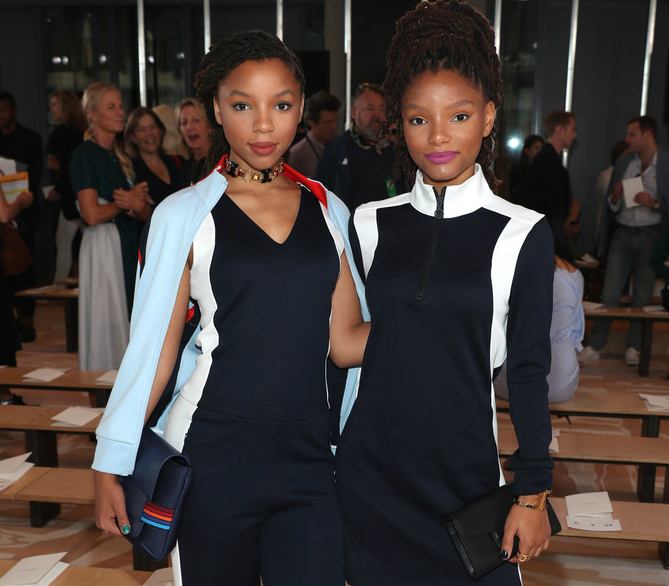 Chloe and Halle Bailey are still having the best year ever, and we are almost headed into 2017.  The sisters, 18 and 16, since being signed to Beyoncé’s Parkwood Entertainment and Management firm, have gained millions of followers, debuted their first EP, Sugar Symphony, have visited the White House, performed for the President, and made a cameo appearance in their mentor’s hit single, Lemonade video.  You would think that they were almost out of “firsts”, well, they are not.

Recently, the singing duo attended their first New York Fashion Week, sitting in the front row at the Tory Burch show.  Elle Magazine got a chance to talk with the sisters and get their first-hand reactions to the show, find out about their new EP, get their reaction on being called style-icons, in addition to finding out the one thing that the sisters fight over.

When asked her thoughts on this new Fashion Week experience, Chloe commented, “Well, we love it so far. We just got in yesterday and this is our first show that we’ve been to, so we’re loving it so far. It’s just so great.”  The young ladies were all smiles when they heard their mentor’s song, “Hold Up” being played during the show. The duo admitted that they are always happy when they hear Beyoncé’s music because they feel that it has such a good energy to it.  When asked about their new project, Chloe simply states, “Well, you know Sugar Symphony, our EP, was just a little taste of what’s to come.”  It will be no doubt that their next project will be a magical fusion, as Sugar Symphony, of all types of sound.

In terms of their growing status of becoming “fashion icons”, the girls admitted that it is a privilege for them because all they do is “put on stuff that makes us comfortable,” comments Chloe. “We just want to inspire people, really, in everything that we do with our music, with what we wear, and just inspire people to be themselves, really.”

So, what is the one thing that the girls fight over? Clothes, right? No, not even close. It is coconut oil!  Yep, you read right−coconut oil! “Yeah,” sates Halle, “that’s like the thing because for our hair, like, that’s such a staple, and we have like one big jar that we share.”