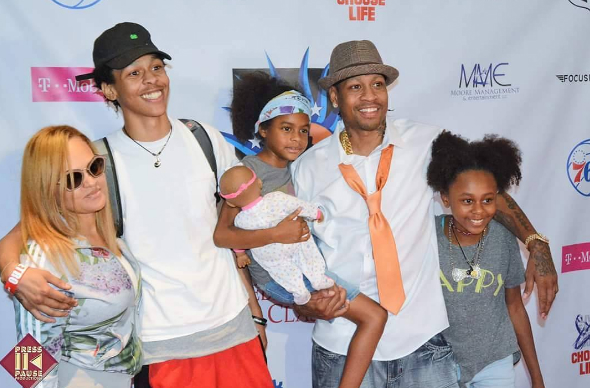 Allen Iverson had family and friends around during his Celebrity UnGala last week. The star athlete was honored for his many contributions to the sports and entertainment industries that have been revolutionized by his skills.

Iverson took the NBA by storm when he was selected by the Philadelphia 76ers during the 1996 draft. The basketball player’s career reached an all-time high at the turn of the century when Allen led his team to a historic 10-0 start that later led to the 76ers having a 56-25 record that was deemed the best in the Eastern Conference.

With all of his accomplishments in the industry, Allen strives to be a positive influence in society. He expressed pure gratitude in fans honoring him for his contributions last week by telling media, “It means everything just because I’m relevant to something positive in kids’ lives. That’s the only thing that matters to me.” Allen further explained, “If I can touch one kid’s life, and impact one kid’s life in a positive way, then I did my job. I did God’s will.”

The 2016 Allen Iverson Celebrity UnGala included an enshrinement in the Naismith Hall of Fame and a silent auction that supported the Philadelphia Athletic League (PAL). Allen Iverson is the proud father of five kids.