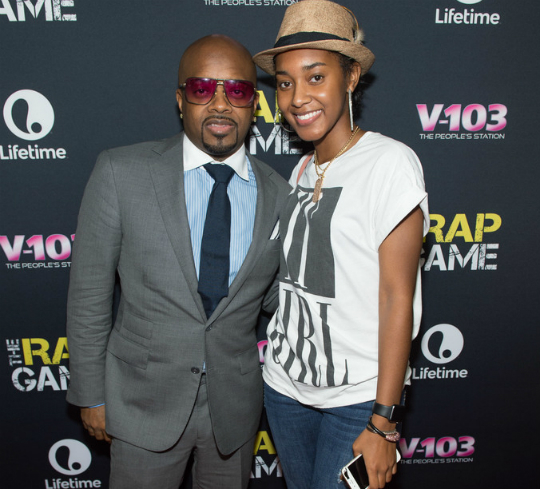 Jermaine Dupri and daughter Shaniah Mauldin gave photographers a few poses before hosting their private screening party of Lifetime’s The Rap Game in Atlanta this past Friday. The celebrity dad and his daughter were on opposite sides of the fashion spectrum as Shaniah rocked casual wear while Jermaine wore a formal suit. The two were the lovable pair who were excited to watch the premiere of season two of Lifetime’s The Rap Game.

This season comes with higher expectations and more pressure as seven of the nation’s best young lyricists battle it out for a record deal. Consistency will be key as Jermaine expects the kids to bring their A-game every time they perform. Some of the youngsters will rise to the challenge while others will crumble under tension. In the end, the best artist will take the title of champion and have the opportunity to work with Jermaine Dupri’s So So Def Records.

Jermaine recently explained his reason for doing a talent show that centers around young rappers. “Let’s be honest,” he said. “For the most part, nobody cares about kid rappers and I have to make people like kid rappers. Like with Bow Wow, I had to make people like him. He was likable but at the same time, I was out there catching the bullets and what people were saying.”

Season two of The Rap Game premiered on Lifetime this past Friday. Catch the show every week at 10/9c.