Home » NEWS » WATCH OUT RILEY! BRANDON PHILLIPS’ 2-YEAR-OLD SON IS MAKING A NAME FOR HIMSELF 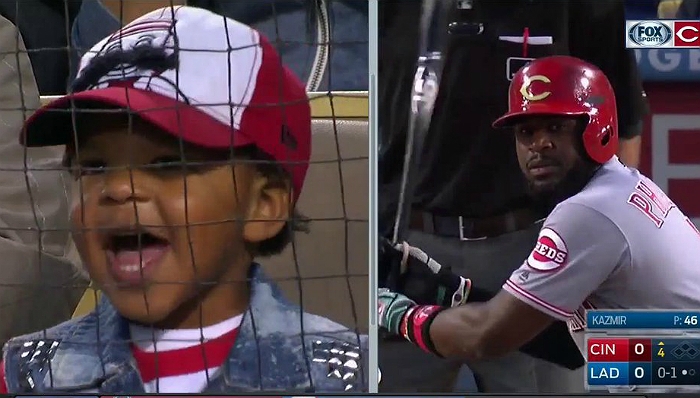 A new star is emerging. Micah Phillips, son of MBA player Brandon Phillips, is 2-years-old and the epitome of adorable in baseball.

The youngster has been recorded while cheering for dad in the stands on several occasions. At one point, Micah waved and blew kisses at fans, which was incredibly adorable. The toddler was also filmed while practicing his swing with dad and a few other professionals in the field. Micah showed amazing talent and control while at the base but struggled a bit when it came to running.

Brandon’s son adds to the list of cute celebrity kids who steal the spotlight from their famous fathers. Riley Curry, daughter of NBA star Stephen Curry, became a superstar in her own right after conducting a press conference with her father that was both lively and lovable.

“Some thought she stole the show. I thought it was beautiful, and I wouldn’t change a thing,” Ayesha said of her daughter’s behavior after Riley’s press conference debut last year. “My husband handled his duties on the podium with ease and class. And my daughter was who she is — vibrant, spunky, and full of life. I hope she carries this with her through adulthood.”

It’s only a matter of time until Micah also becomes just as popular as his father.

LUCKY LUNA! JOHN LEGEND'S DAUGHTER HAS HER OWN LULLABIES