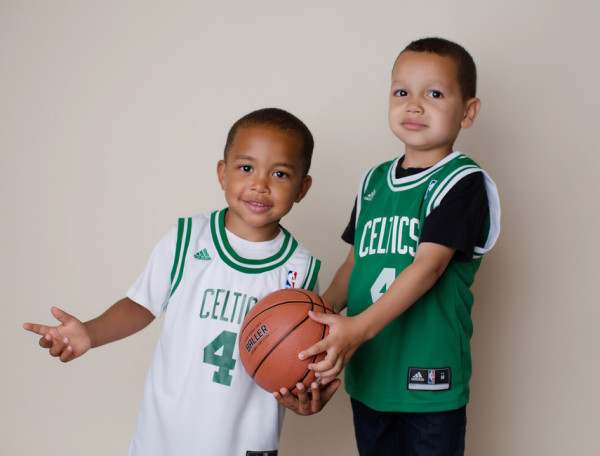 Move over Riley! Two more NBA kids are taking on post-game press conferences like superstars. Isaiah Thomas shared the spotlight with his kids, James and Jaden, on Sunday night after the Boston Celtics beat the Atlanta Hawks in an overtime win.

The boys were two of the most well-behaved kids during the press conference as they sat and watched their father answer questions posed by the media. Isaiah waited until the end of the meeting to introduce his kids to the press and that’s where things got cute.

James, the oldest, took the microphone and said, “Hi everybody.” The 5-year-old bragged on his father by telling media, “[My daddy’s] the greatest basketball player.” Little Jaden closed out the segment by saying, “Thank you.”

Although Isaiah had a stellar performance during Sunday night’s game, the Celtics player remained modest during the press conference. “Don’t give me no credit for that,” Thomas told media when one reporter attempted to shed light on his guarding efforts that caused the Celtics to breakthrough and eventually win the game. Hawks player Jeff Teague held the ball so long at one point trying to avoid Isaiah’s imminent block that the buzzer sounded without him even attempting a shot.

“I think they were trying to isolate me,” Thomas said of the failed play. “I felt like he took a little bit too long, and I kind of knew what he was going to do once the clock hit three or four seconds. Most guards do a hesitation pull-up. He tried it, and he lost the ball.”

See Jaden and James’ adorable meeting with the press below!