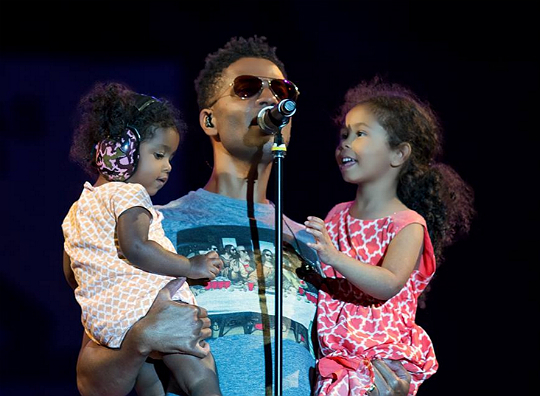 Eric Benet brought two of his daughters onstage at the 24th Annual City of Lights Jazz & R&B Festival 2016. The event was held at Clark County Government Center in Las Vegas on Saturday (April 16) and Sunday (April 17).

Benet brought his younger daughters, Amoura and Lucia, to the spotlight during his segment. The girls sang along with dad as fans listened intently. Lucia even appeared to reach for the microphone at one point. Amoura simply basked in her father’s embrace.

Eric has wrapped up his eighth studio album called Sunshine and is in the process of promoting its release scheduled for fall. “‘Sunshine’ is a reflective memory about a relationship that has lost its spark, with a longing for how love-filled and joyous their lives used to be in the past,” Benet recently said of his album’s lead single. “The song will hopefully inspire people to actively create and savor the joy and ‘sunshine’ in every one of their relationships.”

‘Sunshine’ will be available for download on Friday, May 13, 2016. Eric Benet is the proud father of three daughters.