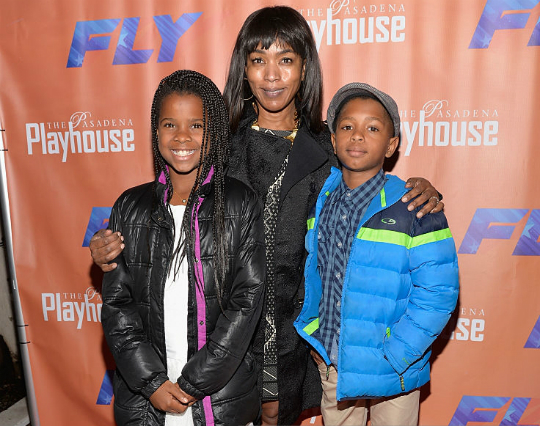 Angela Bassett and the kids, Bronwyn and Slater, attended opening night of Fly at the Pasadena Playhouse this past Sunday. The celebrity mom took several pictures with her youngsters on the red carpet and seemed every bit excited to view the production.

Fly tells the story of the first African American Army Corp fighters who are better known as the Tuskegee Airmen. The play recaptures the experiences that the men faced while serving their country in World War II.

Bassett certainly knows a thing or two about putting a production together. In 2015, the celebrity mom directed the Lifetime biopic of Whitney Houston. “It really was something I couldn’t say no to,” Bassett said of her decision to go through with directing the film. “I felt that if I said no and let it pass, I could imagine having a great deal of regret,” she added. “I wanted to tell a story about a beautiful sista, which is of course an opportunity for me to grow as a woman and as an artist in many expected and unexpected ways.”

Bronwyn and Slater are Angela Bassett’s kids with husband Courtney B. Vance. Learn more about Fly and purchase tickets here.