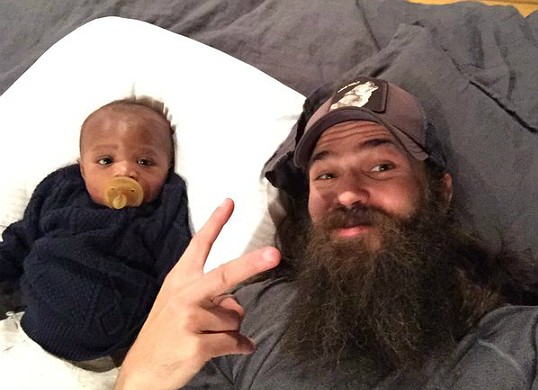 ‘Duck Dynasty’ has a new family member. Jep and Jessica Robertson adopted a son named Jules August who will be featured on the couple’s reality spin-off, ‘Jep and Jessica: Growing the Dynasty.’

The Robertsons were thrilled to announced the newest addition to the family. “This has been a crazy, awesome ride but so worth it,” Jep tweeted. He also uploaded a picture of him and Jules hanging out. “Me and Gus signing out!”

Jessica commented on her and Jep’s adoption as well. “Knowing that we can make a difference and take a child in that maybe would never have a mommy or daddy, you’re changing a child’s life forever, and he’s going to change our life forever,” she shared.

Baby Jules makes the Robertsons parents for the fifth time. Jep has four biological children, including a son named River who promised to protect his little brother during a one-on-one interview. Jules is the second child adopted by one of the ‘Duck Dynasty’ stars this year.

Check out a snippet of ‘Jep and Jessica: Growing the Dynasty’ below!

MELANIE FIONA SHOWS OFF HER BUMP

A CELEBRITY BABY BLOG: 'ALL ABOUT THE KIDS'

A CELEBRITY BABY BLOG: 'ALL ABOUT THE KIDS'