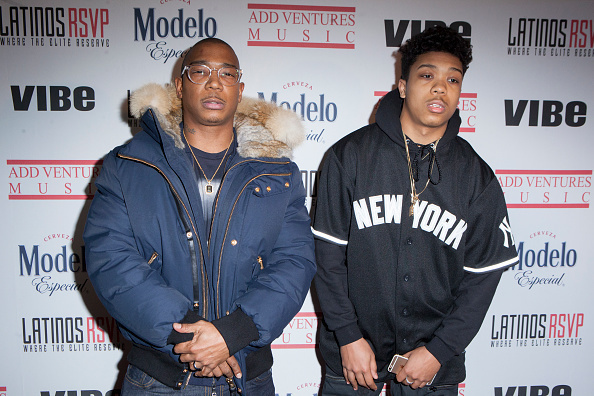 Ja Rule and his son, Jeffrey Atkins, were two of many stars to attend the Add Ventures Music Official Launch Party last week. The event was held at Stage 48 in New York City.

The rapper and his “mini me” were dressed in casual attire for the event. Jeffrey rocked a New York jersey while his father wore a blue jacket with fur. Both men took on the same pose on the red carpet as photographers took pictures .

The Atkins family were featured in their own reality series, ‘Follow the Rules,’ which closed out its first season in December. Ja Rule had the goal of giving America an inside look at his family that wasn’t too much different from the average clan. Like other parents of teenagers and young adults, Ja Rule and his wife Aisha established rules for their kids to follow. Although strict at times, the couple enforced the standards and ended every episode on the note of love.

There is no word on whether ‘Follow the Rules’ will return for a second season. Ja Rule and Aisha parent three kids together.

MARCUS SCRIBNER GIVES THE 411 ON 'BLACK-ISH' AND MORE