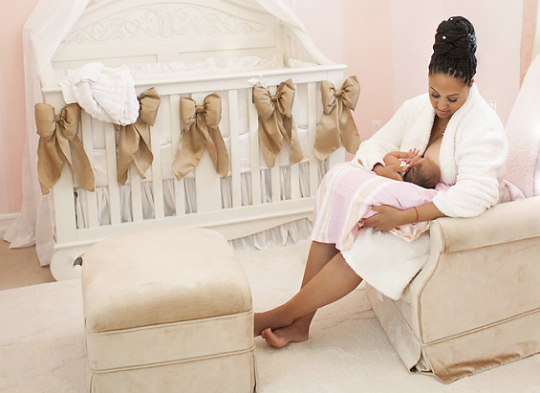 Breastfeeding has been a pleasant experience for Tamera Mowry-Housley. The celebrity mom shares her story of nursing the second time around with blog readers.

“With Aden, breastfeeding was hard. It didn’t come as naturally as we’re meant to believe. Aden wasn’t latching properly, which meant I experienced soreness, my nipples were callused and I was in pain for about 8 weeks,” writes the celebrity mom. “I wanted so desperately to breastfeed that when it didn’t seem like a viable option, I broke down. But I was determined not to give up.”

Although nursing Aden was challenging for Tamera, with Ariah “it’s been unbelievable. I can’t fully express how it actually feels, but the bond it’s building between us is amazing. I cherish every second I can sit down and feed her. It’s our private time together, and I really find it so relaxing. It makes me feel good to know that I can give her everything that her body needs, and I plan to do so until she’s one year.”

Ariah is Tamera and husband Adam Housley’s only daughter. She was born on July 1, 2015, and joined big brother Aden at home a few weeks later. Tamera and Adam will celebrate their fifth wedding anniversary next year.