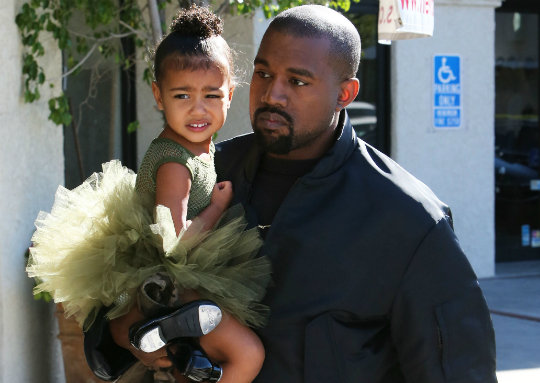 Kanye West is on daddy duty. The rapper was spotted on Wednesday while taking his daughter, North, to her ballet class in Los Angeles.

North was carried into the venue by her father and, of course, surrounded by paparazzi. Kanye moved quickly so as to ensure his daughter received as little publicity as possible. The rapper later returned to the dance company to pick up his daughter after she completed her session. He held her hand as North made her way to the family car.

Kim Kardashian has been taking a break from things as she approaches the end of her third trimester of pregnancy. The reality star recently told fans that she has gained a significant amount of weight during this round of expectancy. “Ok I’m 52 lbs up today,” tweeted Kim earlier this week. She added, “I still have 6 weeks to go! I got my work cut out for me!!!!”

Mrs. West told her blog a few weeks back that the aftermath of pregnancy presents a challenge to her. “As much as I really hate the whole feeling of being pregnant, I enjoy the challenge of getting my body back after it’s all over,” wrote the star. “I feel so accomplished when I’m back to where I want to be,” Kim added.

Kim and Kanye West are expecting a son to arrive next month. North is the couple’s first child.

MO MCRAE AND DAUGHTER ATTEND 'KIDS IN THE SPOTLIGHT' EVENT

MO MCRAE AND DAUGHTER ATTEND 'KIDS IN THE SPOTLIGHT' EVENT