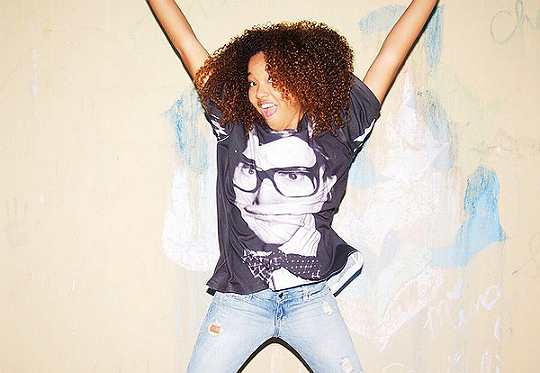 Could Ming Lee Simmons be following in her mother’s footsteps? Maybe so. The 15-year-old recently did a photo shoot for Christopher Lee Sauvé . In a couple of teaser photos that were uploaded by the teen, Ming can be seen posing while wearing a few of Sauvé’s designs.

One t-shirt featured a head shot of Christopher. The designer wears glasses and a bow tie in the black and white photo. The shirt itself is gray, which makes for a good color scheme when coupled with the picture.

Ming modeled the fashion wear in a big way by holding both her arms in the air while jumping high. The teen appeared to be screaming as she reached for the stars. Ming was also captured while wearing a white shirt designed by Christopher that bore writing on it. “WERK IT @mingleesimmons,” wrote Christopher on Instagram. The 15-year-old also shared a few pictures from her shoot with fans. “Got chucks on with Saint Laurent gotta kiss myself i’m so pretty,” captioned the teen underneath the candid of her jumping in the air while wearing one of Christopher’s shirts.

It wouldn’t be much of a surprise if Ming decided to pursue a career in fashion. After all, her mother is a celebrated model who has made millions from her creativity both on and off the runway. “Fashion is my business and I have a great team and this is what I have always wanted to do since I was a baby,” said Kimora of her successful career during an interview last year. “I have a billion dollar brand, I had even started a brand no one wanted, I’ve been through the rise and the fall but it’s all part of the process.”

Wouldn’t it be cool to see Ming take the family business to the next level? We think so. See more pictures of the teen beauty below. Learn more Christopher Lee Sauvé’s designs here.