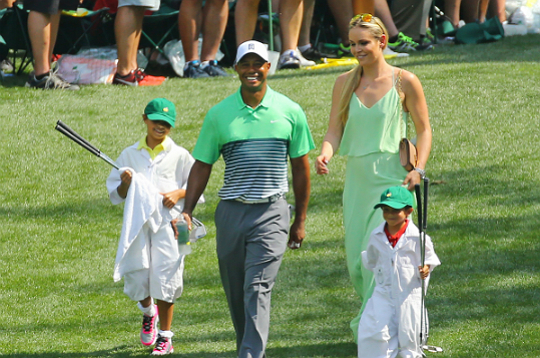 Wednesday was a good day for Tiger Woods. Not only did he return to the golf course to compete in the Par 3 tournament at the Masters, which is something he hasn’t done in more than ten years, but he had the opportunity to share the experience with his kids. The star athlete expressed nothing but happiness in being able to give his children lifetime memories.

“I’ll always have memories of my pop at Augusta and now Sam & Charlie. An amazing day,” tweeted Tiger after the competition. Although he refused to speak with reporters immediately following the tournament, Woods released a statement in which he said his family “had an absolutely great time. These were memories for a lifetime.”

Fans knew that Tiger’s return to the Masters would be sentimental when he announced that his kids would serve as his caddies during a news conference on Tuesday. “This tournament means so much to me in so many different ways,” said the star. “We all know what happened in ’97 with my dad’s health, and he was pronounced, well, he was dead at one point earlier that year; came back, and then came here and I won the Masters. To now have come full circle and to have a chance to have my kids out there and be able to share that with them, it’s special.”

Both of Tiger’s kids, Sam and Charlie, did a spectacular job of serving their father on the course. Tiger also did a marvelous job of competing against other players. Sam and Charlie are Woods’ kids with ex-wife Elin Nordegren.