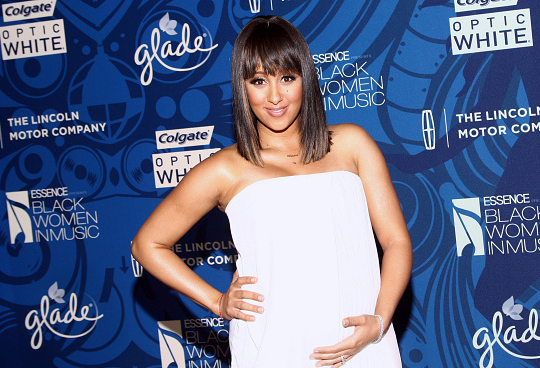 Tamera Mowry-Housley cradled her baby bump at the 6th Annual Essence Black Women In Music event held at Avalon on February 5, 2015 in Hollywood, California. The expectant mom, who was dressed in all white, was joined by her co-stars from television talk show ‘The Real’.

Held during GRAMMY week in Los Angeles, Essence Black Women In Music celebrates the achievements of both emerging and established artists and influencers in the music industry. This year’s event honored Jill Scott and featured performances by Chaka Khan, Brandy, MC Lyte, and Lianne La Havas.

Tamera and husband Adam Housley are expecting a baby girl in July. They are already parents to two-year-old Aden Housley.