HOLLY ROBINSON PEETE AND SON TAKE IN A BASKETBALL GAME 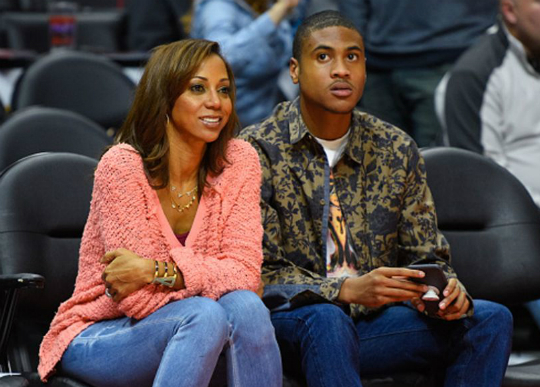 Holly Robinson Peete and son Rodney Peete Jr. attend a basketball game at the Staples Center in Los Angeles. The two enjoy court side seats as the Los Angeles ‘Clippers’ battle against the Denver ‘Nuggets’ for the win.

Holly and the family have been heavily involved with Autism Speaks and its newest effort to spread awareness about autism. The family and their charity, HollyRod Foundation, are set to partner with Autism Speaks in hosting the Super Kid Honors on Friday, January 30, 2015. Super Kid Honors is a Super Bowl tailgating party that will raise funds for autism research efforts. It is also an event that will recognize high school student Vincent A. Stover, who has managed to beat all odds and become a star football player at his school.

Rodney Jr. certainly knows a thing or two about beating the odds. The teen has managed to cross several milestones since being diagnosed with autism many years ago. “He is working at the summer camp with children with autism, where he learned to speak,” said Holly of her son’s ability to obtain a summer job in 2013. “It is so awesome. He comes home, and it’s so sweet, and he’s like, ‘You know mom, you know these kids with autism, they struggle to communicate.’ …Rodney and I are just so proud of him.”