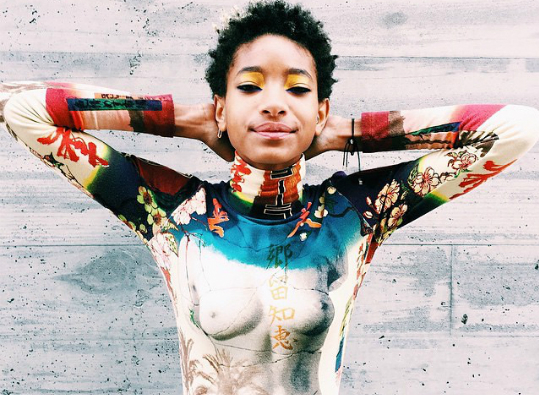 There is never a dull day in the life of Willow Smith. The teen recently shared a picture of herself while wearing a graphic turtleneck top that has the online world talking.

In the photo, Willow poses with both hands behind her head. The top that she is wearing displays the chest and abdomen of a woman along with various colors that make for great art.

Although the creativeness of the top may have been Willow’s inspiration for photographing herself while wearing it, some are scrutinizing the teen for sporting such graphic attire. For the most part, critics are saying that the shirt is inappropriate due to Willow’s status as a teenager.

This certainly isn’t the first time that the youngest member of the Smith family has come under the perusal of the public. Willow and her parents were criticized a few months ago when the 14-year-old shared a picture of herself in bed with good friend Moises Arias. Most critics found fault in the picture because Moises, who is more than five years Willow’s senior, was shirtless.

Willow is Jada Pinkett-Smith and Will Smith’s only daughter. The couple have two children together, and Will Smith has three kids in all.