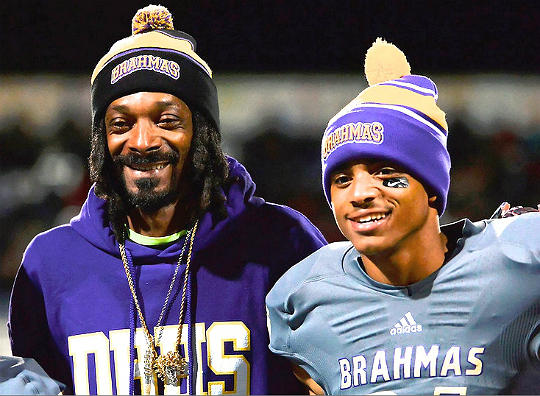 ESPN’s new five-part series, Snoop and Son: A Dad’s Dream, is set to premiere on January 14th. But in case you aren’t already excited for it, here’s a sneak preview.

The docu-series will follow Snoop and his son Cordell as he makes his way through his senior season as one of the most sought after high school football stars today. His love of the game first blossomed under his father’s wing, while Snoop was coaching his little league team. Year later, Snoop remains by his side every step of the way during this incredible journey so few ever get the chance to have. Meanwhile, colleges from all over are vying for his attention.

Snoop has said: “I’ve been known for my work in many industries, but what I am most proud of is my beautiful family. My son is an extremely talented athlete and my wife and I will be by his side wherever he chooses to play.”

The rap icon will be shown in a new light throughout this series. Executive producer, Rory Karpf, promised: “People will see a very different side of Snoop. They’ll see a man navigating the line between father and friend. They’ll see someone whose interest in his son’s life reflects what he himself never had. Above all, they’ll see a father extraordinarily proud of his son.”

The series will air Wednesday nights at 7pm this January.