HEIDI KLUM AND KIDS ENJOY A NIGHT OF ‘THE NUTCRACKER’ 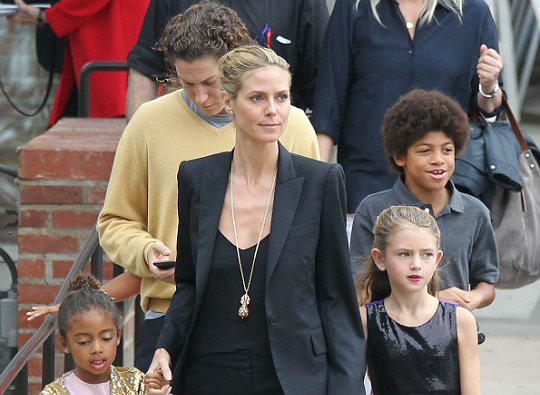 Heidi Klum and daughters Lou and Leni were ready for a night at the theatre this past weekend. The model and her daughters spent a bit of time at the Grove in Los Angeles, and later headed to see the Los Angeles Ballet’s presentation of ‘The Nutcracker’ at UCLA’s Royce Hall in Westwood.

Leni and Lou were dressed to impress as the youngest of the bunch wore a pink dress with shimmery jacket to the presentation. Leni wore a black and blue outfit with high heels.

Although the women of the family stole much of the spotlight, the men of the bunch were also present to watch and enjoy the show. Henry and Johan were more on the casual side of dress as they accompanied mom and sisters to the theatre. Pollo shirts seemed to be the highlight of the boys’ attire.

Check out more pictures below of the model and her kids and a few of them at  the Grove in Los Angeles, California earlier during the day on December 20, 2014!