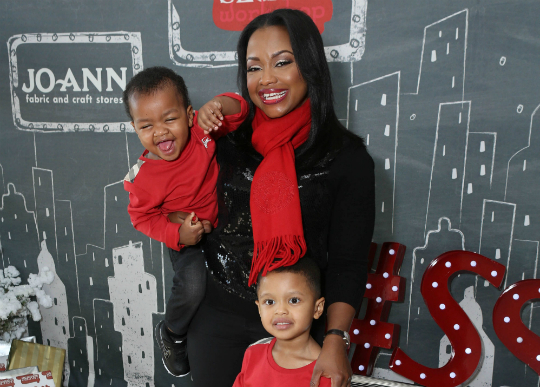 Phaedra Parks and her favorite little men joined Santa and his little helpers in spreading a bit of hope this past weekend. The ‘Real Housewives of Atlanta’ star took her sons, Ayden and Dylan, to the 4th Annual Santa’s Secret Workshop (SSW) at Andaz Hotel in West Hollywood on Saturday (December 6).

Both Ayden and Dylan appeared to be happy about attending the event. Dylan, the youngest of the two, showed more exuberance as he laughed loudly while in mom’s arms on the red carpet.

This year’s SSW was a big success, with stars from Hollywood and beyond coming out to give to the underprivileged. Celebrities brought diapers and wipes, and participated in a number of activities offered at the event. Bill Horn and Scout Masterson of Marque Communications hosted the workshop.

All proceeds from the event went to L.A. Family Housing. The non-profit organization aims to end homelessness in Los Angeles by giving individuals the tools needed to rise above poverty.

Phaedra Parks is the proud mother of two kids. Learn more about L.A. Family Housing at the organization’s website.

LEILA ROKER CELEBRATES HER 16TH BIRTHDAY WITH FAMILY AND FRIENDS

PRESIDENT OBAMA: 'I WANT MY CHILDREN TO BE SEEN AS THE INDIVIDUALS THEY ARE'

PRESIDENT OBAMA: 'I WANT MY CHILDREN TO BE SEEN AS THE INDIVIDUALS THEY ARE'