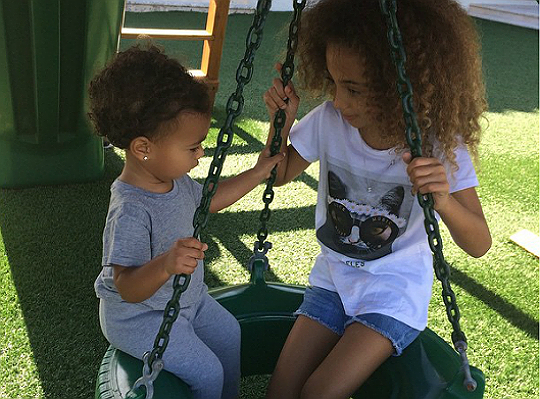 Sophia Pippen has a playmate in North West. The daughter of former NBA player Scottie Pippen and wife Larsa was recently photographed while enjoying a day of fun with Kim and Kanye West’s daughter.

Sophia held the tire steady as she and North rested on it. North was apparently taking lessons from her elder as she too held onto the chain that was keeping the tire suspended in the air. “Sophia and North take Miami,” tweeted Larsa. Kim Kardashian-West also shared the cute picture with her Instagram fans.

Little Sophia is turning out to be the model of the Pippen family. The youngster has participated in several photo shoots and struck personable poses while out-and-about with mom. Larsa captured her daughter while wearing cat ears in one candid. “My favorite cat,” tweeted the basketball wife.

Larsa and Scottie Pippen have four kids together. North is Kim and Kanye West’s first child. Check out more pictures of Sophia below!