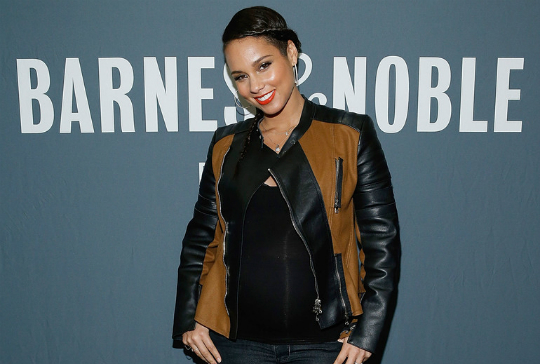 Alicia Keys promoted her new book “Blue Moon: From The Journals Of Mama Mae & LeeLee” at Barnes & Noble Tribeca on November 12, 2014 in New York City.  Blue Moon was released on Tuesday and tells the story of  the relationship between a grandmother and her granddaughter.

While on the Wendy Williams show on Wednesday, Keys talked about her latest book project. She explained , “My children’s book is called the ‘Adventures of Mama Mae and LeLee. LeLee is loosely based on me and Mama Mae is her grandmother. We really modeled the relationship after myself and my grandmother. So its anybody’s nana, big mama or grandma. It’s such an important thing, i think, the relationship between child, mother and grandparent. So [this book] shows that. So Leelee is a girl [who] just moved to New York city. She is very uncomfortable and she is worried about how she is going to fit in. So Mama Mae through her journals takes her back to Native American times.”

She added that the book is “about introducing different cultures, sonic and sounds. We actually started it as an app. So there is An Adventures of Mama Mae and LeeLee app that you can get right now. There are two books that go along with that and this is the first hardcover book….”

Alicia and husband Swizz Beatz, who are already parents to four-year-old Egypt, are due to welcome their second child in late December.

OMARION AND GIRLFRIEND SHOW OFF THEIR BABY BOY