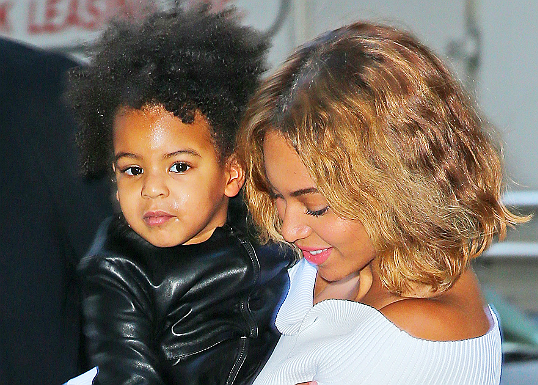 Look it’s Blue! The 2-year-old was spotted out-and-about in New York City with mom Beyonce on Tuesday. Blue was the fashion forward tot with a fluffy black skirt and tights that matched her mom’s white blouse with striped skirt. It appeared to be a girls’ day out as Jay-Z was nowhere in sight.

Bey is rumored to be working on an album that she will debut by surprise in coming weeks. Nicki Minaj and Rihanna are said to be featured on the project alongside 2-year-old Blue.

This will be the third time that Blue will be featured on one of her parents’ records, if the rumors are true. The 2-year-old was showcased on Bey’s album that made its unexpected debut by way of iTunes last year, and was featured on dad’s song ‘Glory’ just days after she was born in January 2012.

We will have to wait and see if Bey is releasing an album that will have her daughter at the forefront this time around. For now, check out more pictures of the mother-daughter duo!