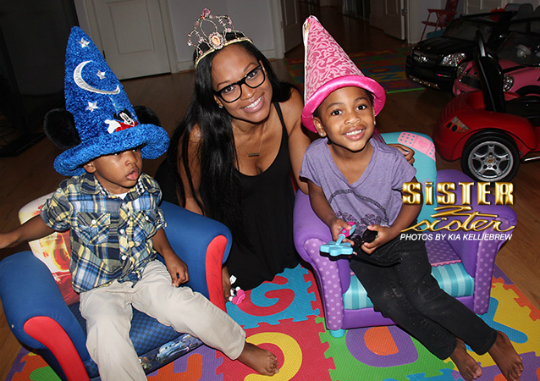 Mason and Madilyn are Irish twins with birthdays one month apart from one another. Although Monyetta now loves the idea of having kids whose ages are in close proximity to one another, the celebrity mom tells Sister 2 Sister that her perception wasn’t always so clear.

“It was not planned. I was about to lose my mind when I found out that we were pregnant again,” says the star. However, “God knew exactly what he was doing. They are the best of friends. They are super close, and I wouldn’t have it any other way. They both potty trained together. He’s so advanced because they’re the same age [for a month].”

Shaw also tells media about her ex-fiance, Ne-Yo, who is also the proud dad of little Madilyn and Mason. “He is a hands-on father,” explains Monyetta. “He changes diapers. He just throws them all around. He’s so fun. They adore him. …He’s a good father.”

Although Ne-Yo was classified as being controlling after revealing that he and Monyetta decided to have her undergo tubes ligation surgery after Mason was born, Shaw reassures her public that the decision was mutual. “We talked about that, and we were actually both doing it,” shares the star. “He could have gotten his [procedure done]. But I don’t know if he went through with it.”