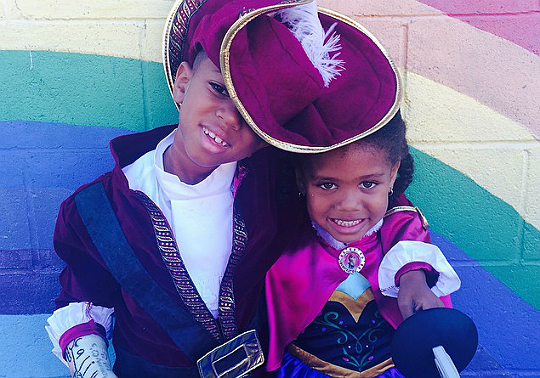 Cali Dream and King Justice are frozen and hooked. The brother and sister recently dressed in costumes that resembled their favorite Disney characters for a school function.

King dressed as Captain Hook, while Cali portrayed Anna from the hit film Frozen. Both of the siblings took a pause for the cause to smile for the camera, and give mom a good picture. “Brother and sister love,” tweeted Tiffney Cambridge. “I love my kids,” wrote the reality star.

Tiffney has gone to many lengths to help her children understand her strained relationship with their father, Jayceon Taylor. The celebrity has engaged in many hear-to-heart conversations and even written a children’s book that had characters with divorced parents.

Tiffney and Jayceon have been taking a breather from one another since 2012. It was during this time that the first season of their reality series ‘Marrying The Game’ was airing, and Tiffney deemed it best to live a life apart from Jayceon. The former school teacher gave back the engagement ring the rapper gave her a few months back, and told him that their relationship needed further evaluation during the season finale of the show. The final episode was supposed to have been reserved for Jayceon and Tiffney’s wedding day.

Cambridge and Taylor have two children together. Jayceon has three kids in all.