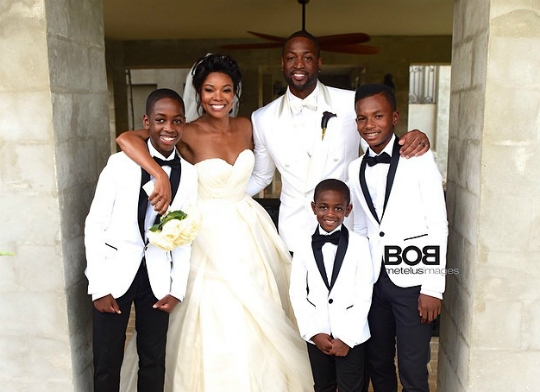 It’s a union made in heaven! NBA player Dwyane Wade and actress Gabrielle Union married this past weekend in a lavish wedding.

NBA star Dwyane Wade married actress Gabrielle Union at sunset at the lavish Chateau Artisan estate, which contains a private lake and resembles a castle surrounded by a moat, in the Miami area on Saturday, E! News confirms. They were surrounded by family and friends, including the athlete’s elder two sons and nephew.

The bride wore a stapless Dennis Basso ballgown with a sweetheart neckline as she walked down the aisle, while the groom wore a Dsquared2 Tuxedo, a custom Wedding Collection Tie Bar bowtie and a Floral Fix boutonniere.

Wade proposed to Union in December 2013 after four years of dating; Union’s engagement ring is 8.5 carats and it’s worth nearly $1 million. The baller “was 100% involved in the process,” Jason Arasheben, CEO of Jason of Beverly Hills, told E! News. “I made three personal visits to Miami to present different options until they found the perfect one. Dwyane picked out the stone and they made the ring custom.” Read More

This is the second marriage for both Wade and Union. Wade is a hands-on dad to his three young sons and a nephew.