Home » NEWS » HEIDI KLUM DINES OUT WITH KIDS IN NYC

HEIDI KLUM DINES OUT WITH KIDS IN NYC 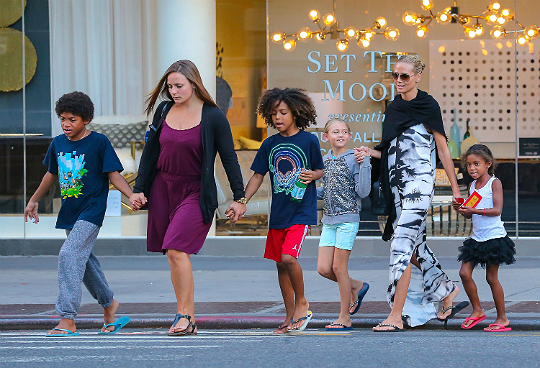 There is nothing better than doing lunch in New York City with your kids. Heidi Klum took her four pals out for dining at La Esquina on Sunday, and the whole group looked fabulous.

Heidi was definitely dressed to impress as she wore a dress fit for summer with matching wrap. Leni, Lou, Henry, and Johan were also decked out in casual wear that was simple yet cool.

The kids saw the sights while dining out, and laughed hysterically upon seeing a promotional poster for ‘Project Runway’ that featured Klum. Leni appeared to be most amused by the photo as she nearly bent over in laughter while holding her mom’s hand.

It was just a few days ago that Heidi wore a gown made entirely of strings that was designed by one of the contestants on ‘Project Runway’ to the Creative Arts Emmy Awards. The fashion model twirled on the red carpet as she showed off the versatility and durability of the dress created by Sean Kelly. There were no wardrobe malfunctions during Heidi’s spinning, and the color of the dress was beautifully shown through all of the action.

Heidi Klum and ex-husband Seal parent four kids together. Check out more pics of Heidi and her NYC kids below!