GET TO KNOW THE LADIES OF ‘THE GUEST HOUSE’

by BCK staff
in Big Kids, Video, YOUNG STARS
0
1
VIEWS
Share on FacebookShare on TwitterShare on LinkedinShare on Whatsapp 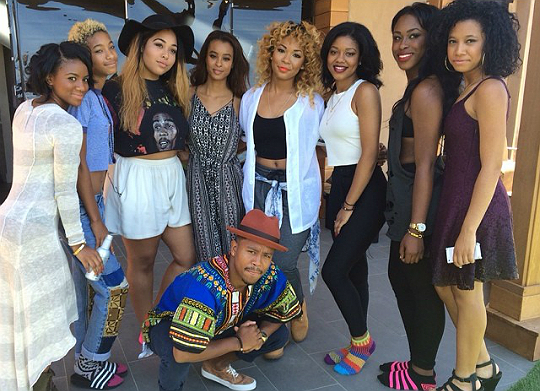 Nala Wayans and Kennedy Rue-McCullough are starring together in an upcoming reality show, The Guest House. The girls, both born to famous comedians, will be featured alongside their closest friends, giving the public an inside-look into their teenage lives. Details have yet to be revealed, but it seems the show will follow a talk-show format, as the girls discuss hot topics and important issues for young women.

In the show’s promo, Nala (18), the daughter of Daphne and Keenan Ivory Wayans, is introduced as the mean girl. Imaged as the typical pretty ditz, Nala is quick to point out that despite what people think, she’s not stupid. But by all of her friends accounts, she’s definitely mean. “People don’t get my sense of humor,” she admits.

Meanwhile, Kennedy, daughter of The Jamie Foxx Show actor Suli McCullough, describes herself as a cheerleader who should really be on the boys basketball team. “But um, I’m not good,” she admits. “I just want to be on the team.” The budding actress made her Hollywood debut back in 2003 in the feature comedy, Daddy Day Care.

Also in The Guest House is Taylor Zaria, the “hustler of the group” who is about to move into her own home. “I like to thrift, I bargain shop, but I still look cute,” she exclaimed. The “rock star of the group” is Rachel Harris, who says she feels like she is “too hot.” To her credit, she knows how to keep up with trends. Last but not least is Jordyn Woods, the one who is misinterpreted as quiet. Her friends no better, though. “I’m actually the social out of the group” she stated. Also

The Guest House premiers on August 26th and will have guests such as Sofia Richie, Willow Smith, Mindless Behavior, Ian Alexander and newcomer Mecca Kalani , to name a few.