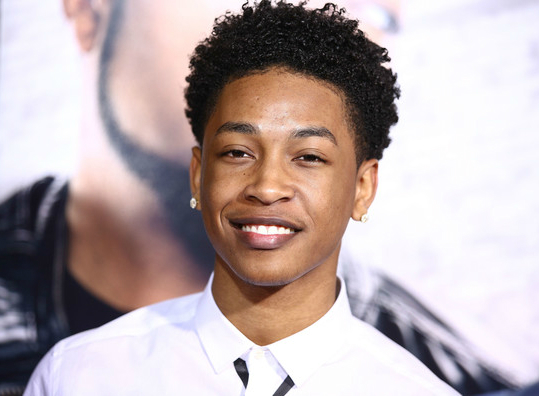 As Jacob Latimore approaches his 18th birthday he can look back fondly on his past year, and look anxiously ahead to all those to follow. Currently, the young star is on the billboard for his debut single, “Heartbreak Heard Around the World”, featuring T-Pain. He is also doing very well for himself on the big screen, with a supporting role in the action-sci-fi, The Maze Runner, which premiers September 19th.

Global Grind recently caught up with Jacob to discuss his blossoming career and his transition from kid to young adult. When asked if he had any big plans for his milestone birthday (August 10th), the star revealed that he’s never been much of a party-guy. That being said, 18 is worthy of celebration. “I’ve never been the super party type. But for the 18th birthday you got to party.” Jacob added, “And then 21 is going to be even bigger.” Naturally, entering a new stage in his life will be reflected in his music. “I want this album to be really honest and to really talk about the things I go through being on the road, growing up, being 18, and just partying. A lot for a young adult.”

Jacob explained that his music may be headed toward a slightly “edgier” direction, but that the transition has to made in due time – no rush. Balancing the fans he has now, with the fans he wants to have is his main priority as he sorts out the feel of the upcoming album. He said, “We don’t want to hit them too hard with anything. We do want to go there eventually. Because I am growing up and I’m not 13 anymore, and I’m going through more stuff than I was before.”

Right now, Jacob is simply enjoying the record-making process, which can be a long one. He noted, “You record like 300 songs and only 12 songs go on the album. It takes time.” But at the end of the day, it sounds like there is nowhere the young celeb would want to be rather than in the studio, making music inspired by some of his heroes – Ty Dolla $ign, K Camp, Usher, and Chris Brown, to name a few.

Although acting seems to come naturally to Jacob, he has made it clear that music is his one and only true love. Just the same, you won’t want to miss him in the upcoming young adult blockbuster. According to Jacob, The Maze Runner is “going to be really huge.” Within two days of the release of the first trailer, it had over a half million hits. “I’ve read the book myself,” the young star added, “I see why people are really into this. I’m super pumped for September.”

Honestly, why wouldn’t he be. The movie looks very exciting, the album sounds like it’s shaping up to blow fans away – there is just so much positive ahead for Jacob. Come his 18th birthday, and the release of these latest projects, he just may become unstoppable.

One thing is for sure, his name will be ‘heard around the world.’