JADEN SMITH REPRISES THE ROLE OF BATMAN FOR COMIC-CON 2014 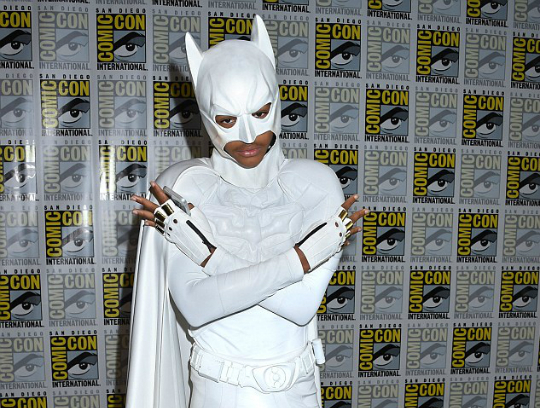 Jaden Smith was dressed to impress once again at Comic-Con San Diego this weekend. He donned the all-white batman getup that he had worn with pride to Kim and Kanye’s wedding in May.

The young actor, rumored to be dating Kim Kardashian’s younger sister, Kylie Jenner, was no doubt a big hit at Comic-Con. A star in costume is never not exciting, or at the very least, eye-catching. Jaden sat in for the world premier of the miniseries, Wayward Pines, and then posed with Executive Producer, M. Night Shymalan. Jaden and Shymalan established a professional relationship  with Shymalan when he ands his father, Will Smith, starred in his 2013 sci-fi, After Earth. It’s something of a surprise to see the 2 at Comic-Con this year, since neither made it out to promote After Earth last year.

Kris Jenner, Kim’s mother, was one big fan of the costume at the wedding. She said, “He had this Batman costume on and I thought it was just genius… He looked so good, and so fun, and he also has a really good sense of humour.”

However big a hit the costume was at the wedding, it’s safe to say Comic-Con is a far more appropriate setting for such antics.

Although, the white remains a mysterious choice…