by BCK staff
in Big Kids, Video, YOUNG STARS
0
1
VIEWS
Share on FacebookShare on TwitterShare on LinkedinShare on Whatsapp 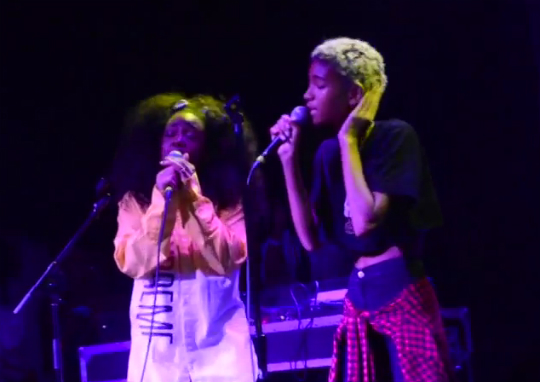 Last night, Sza’s performance at the Red Bull Sound Select Show in Brooklyn was amplified when she brought out Willow Smith to perform their song “Domino”.

Teen Vogue recently caught up with 13 year old Willow who had this to say about the current state of her music: “I have enough songs to make an album, but most of the songs I don’t like.” However, she promised that when we hear it we can expect the unexpected. “It’s going to be something outlandish, something that nobody can imagine, something that comes from me and only me. Something we need right now.”

It’s no surprise then to see her teaming up with Sza, whose musical style is often referred to as a new sound dubbed “alternative R&B” or “PBR&B”, a term that alludes to PBR’s (Pabst Blue Ribbon beer) association with hipster subculture.

Sza has already excitedly turned to instagram to rave about the duet, saying: “Thank you to my baby girl my sunflower my genius my sister @rookooks (willow smith) for coming out to perform our special song tonight !!! baby your such a force to be dealt with and tonight you gave them a GLIMPSE..glow on I love you…if you wasn’t there to hear it you wasn’t there.. You’ll have to wait.”

But of course in today’s fast-paced digital-age, you don’t have to wait. For a glimpse of the performance, you can check out YouTube.

Willow might be taking her time launching her music career (“Whip My Hair” was already 4 years ago), building notoriety and a public image in the meantime, but Sza, 23, is now hard at work on her fourth studio album, A.