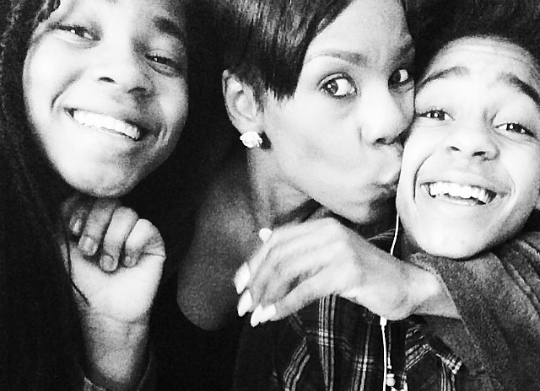 In a VH1 exclusive, Andrea Kelly spoke openly about her decision to support her child as he undergoes the process of transitioning from female to male. Jay Kelly (born Jaya Kelly) has been very public about his position as a transgendered teen, and while he admits he was a kind of nervous to tell his his father, R&B superstar R. Kelly, due to their complicated relationship, there has been nothing but love and support from the rest of the family.

Andrea explains, “All I can say about Jay is he makes it so easy to be a proud mom. For parents, we need to realize, [our kids] have their own journey. Parents get it wrong when they don’t support their children. They have to go out and fight every day and face this world. The first battle should not be at home. I think that a lot of children in the LGBT community don’t succeed because the one thing they need the most is foundation. I just tell Jay all the time, ‘baby you won the war. You’re gonna have a lot of battles but you won the war’.”

The Hollywood Exes star admits that the transition will come with its own set of challenges for the family, especially the task of switching from the feminine pronoun. “My dad is a retired military naval officer and all he said was, ‘I’m gonna mess up sometimes and [use the feminine pronoun] ‘she’ but I’m gonna eventually get the ‘he’ thing. Just give grandpa some time. I’m gonna get it dude.'”

She continues, noting that even she messes up now and again, but is happy to be able to laugh about it. “When I make that mistake I’m like, ‘Girl, you got a son, honey, get it together. Get it right’ [laughs].”

Jay has expressed interest in pursuing medication and surgery to fully transition, but at only 14, that’s all some time away. Although, research shows that it’s never too early to begin thinking about the future steps. One issue in particular, according to Dr. Laura M. Alie, is that “not delaying hormonal and physical development will allow the adolescent’s body to fully form into a mature body aligned with the child’s biological sex”, she explains that “this can have long term consequences if the child later decides to transition”.

But for now, the lines of communication between Jay and his family have been opened, which is the most important step. However, Andrea also points out the importance of Jay taking his news to the public where she believes his story can change lives. This proud mom is therefore very happy to be able to describe her son as “courageous”. Especially admirable is having the strength to do so within the black community, which Andrea sees as being less open to issues of gender and sexuality.

“I need [people], especially in the black community, to stop burying their heads in the sand… We need to stop worrying about people’s gender and sexuality and think about the choices we’re making with our youth, period. That’s what we need to focus on in my community.”

Without a doubt, Andrea has proven herself to be a loving mother and a strong woman who has handled herself with nothing but grace in this complicated situation.