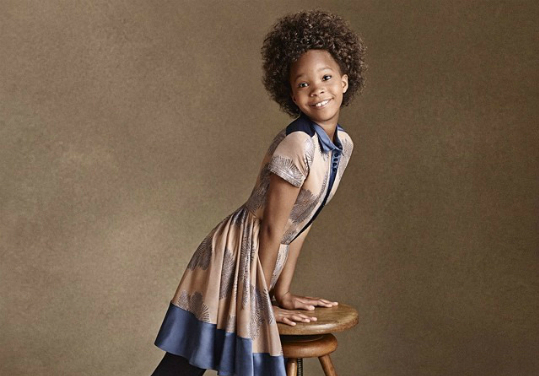 Armani Junior has released a behind-the-scenes video during Quvenzhane’s campaign shoot for the fall/winter collection for Armani Jr. The video highlights Quvenzhane’s ease in front of the camera as she goofs, dances, and even poses with a puppy, laughing all the while.

At only 10 years old, the actress made history earlier this year when she became the youngest ever Oscar nominee for her role in 12 Years a Slave. Now, she’s making history once again as the first black girl to play the role of Annie in the upcoming big-screen remake.

Quvenzhane has a lot to be excited about with her acting career starting off with a bang. But in regards to this new gig for Armani, the young star enthusiastically told People,”With acting you have lots and lots of lines. When you’re doing modeling you make faces, you dance, you just play around! And it doesn’t really matter what you do. With acting you have to be very precise with what you’re doing.”

Meanwhile, designer Georgi Armani delightedly gushed about Quvenzhane’s talent to The Hollywood Reporter. “[She] is so talented, despite her young age. Her kindness, curiosity and openness toward others really struck me, as they are all traits I admire.” He continued, “It is for this very reason that I wanted her to be the face of Armani Junior. With her insatiable energy, Quvenzhane made the clothing come alive, interpreting it in her own singular way.”